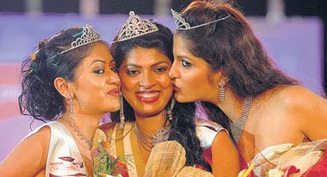 World’s largest flower carpet has been made in Kannur district of Kerala. This Poo

kkalam which is called as ‘Othoruma’ was designed by the people of Kannur. This pookkalam which was designed on 18th September 2011 attained attraction as it had broken all the previous records of Pookkalams made before.

The Pookkalam was arranged at Collectorate Stadium in Kannur. The flowers that were used for the Pookkalam include ‘chetty’ flower, ‘astras’, ‘chinthamani’, white’jamanthi’, ‘chendumalli’ etc. and there were seven varieties of flowers. These flowers were specially imported from Karnataka and Tamil Nadu. The people who took part for arranging this giant Pookalam includes NCC, NSS, Scouts and guides, junior red cross, students and Kudumbasree women.

The main feature of this Pookkalam is that the 7 different varieties of flowers were used for symbolizing the seven continents. The design of the Pookkalam was also attractive which include designs of Theyyam which is an art form of Kerala, a design of pigeon surrounded by human chain depicting world peace etc. The arrangement of flowers right from the beginning were captured in a video which is to be send to the authorities of the Guinness Book of Records and Limca Book of Records for their verification.

Giant Pookkalam records that were made so far include the one designed at Kozhikode in 2010 which has a length of 15,000 sq ft and the Pookkalam made at Kochi in 2008 that has a measure of 12,000 sq ft.