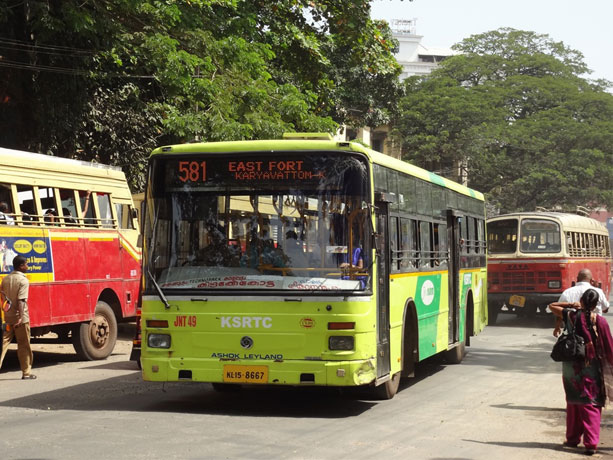 Kerala has a well connected road network.  In Kerala there are 8 National Highways that connects all the major cities and towns within Kerala and outside Kerala. There are about 50 state highways which connect every corner of our state. The condition and quality of each road differs from one another. Normally the National Highways are of good quality and the roads are wider and maintained well. Some of the state highways are also in good condition. The condition of the roads of Kerala becomes worse due to the climate in our state. The monsoon season is long in Kerala and the rains trouble the roads. Another reason for the bad situation of the roads is the usage of heavy vehicles.

The longest National Highway in Kerala is NH 17 with a length of 417 kms that passes through Kerala. This highway starts from Panvel in Mumbai and joins the NH 47 at Edapalli in Cochin. NH 17 is a Highway that connects four states namely Maharashtra, Goa, Karnataka and Kerala. When you move through this highway from south to north, you pass through various areas in which different types of languages are spoken. For example as you start from Kerala, the language spoken is Malayalam followed by the Karnataka state where the language is Kannada and Tulu. In Goa the language is Konkani and we can hear Hindi and Marathi in Maharashtra. On the way we can see several caves, hills and humps in this national highway.

NH 47 is a national highway which passes through Kerala and is a busiest highway of Kerala. The roads are very busy that it might take hours to travel a short distance through the Cochin bypass of NH 47. This road is near to some of the major railway stations and airports of Kerala. It passes close through the Thiruvananthapuram and Cochin Airports. This road is mostly 2 lanes with 4 lanes at some places. It also passes through the Ghats in the Palakkad Thrissur stretch.

National Highway 47A is the smallest national highway in our country covering a distance of 6 kms. This highway starts from Kundannoor junction in Kochi and goes upto Willingdon Island in Cochin.

The Cochin-Rameswaram national highway which connects the east coast to the west is called as NH 49. It starts from Cochin and moves North West to Muvattupuzha and then takes a south west direction to Rameswaram. On the way is passes the Ghats, wild life sanctuaries and the beautiful tea plantations of Kerala and Tamil Nadu. Munnar lies in this route.

The routes through which NH 49 passes through Kerala include Cochin – Thripunithura -Muvattupuzha – Kotamangalam- Adimali – Devikulam – Bodimettu. It is the exit from Kerala to Tamil Nadu.

The national highway that connects Kollam and Thirumangalam is called NH 208. In Kerala, this road meets NH 47. The route through Kerala does not provide any scenic beauty but near the Tamil Nadu border, it is an interesting journey through the middle of the forest. Through this road one can easily reach Thenmala which is the First Ecotourism Park in India.

The route through which NH 208 passes through Kerala include Kollam – Kottarakara – Thenmala –Aryankavu. Aryankavu is the border to Tamil Nadu.

The national highway that connects Kozhikode and Mysore is called as NH 212. It passes through the Western Ghats and wildlife sanctuaries in the state. It is a usual thing to have a glimpse of the elephants and deers on the way. The Muthanga wildlife sanctuary lies on this way. This road which has steep hills and hairpin curves is the easiest to reach this sanctuary. On the way there are tea plantations also.

The routes through which NH 212 passes through Kerala include Kozhikode – Thamarassery – Kalpetta – Sultan Battery –Muthanga. Muthanga is the Karnataka border of Kerala.

The national highway that connects Palakkad and Malappuram is called NH 213. The routes through which NH 213 passes through Kerala are Palakkad – Mannarkkad – Perinthalmanna – Malappuram with the junction at Ramanattukara.

The national highway that connects Kollam and Teni is called NH 220. This road extends in the same route as that of NH 208 till Kottarakara. When it reaches Teni it merges with NH 49. On the way lies the Periyar National Park at Thekkady.

The routes through which NH 220 passes through Kerala include Kollam – Kottarakara – Adoor -Thiruvalla – Kottayam – Kanjirapalli – Vandiperyar- Kumili. Kumili is the Tamil Nadu border.