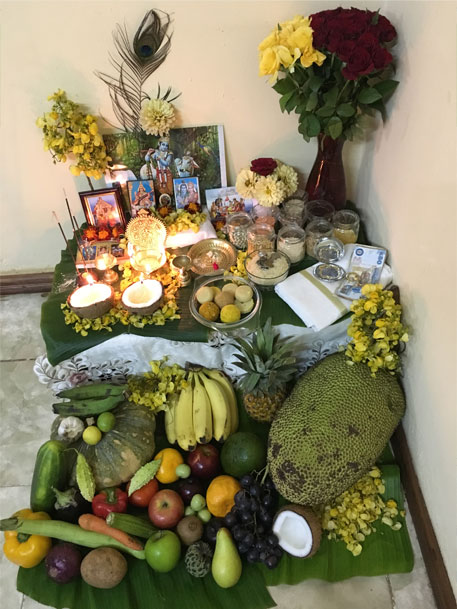 Vishu is an important festival of Kerala. Vishu is celebrated with religious beliefs even though it has got nothing to do with the religion. Vishu is always celebrated in the Malayalam month Medam. It comes on the first day of Medam and does not change each year. All the other festivals are celebrated based on the lunar stars.

Vishu is considered as the astronomical New Year and so is celebrated by all the Keralites. People have a belief that as it is the starting of a new year, the fortune of that year is based on the object they see first on this particular day. So, people make it a habit to see any item that is auspicious in order to bring good for them that year.

They prepare what is called as Kani on the previous night of Vishu. A vessel filled with various items such as fruits, vegetables, home made sweets etc are kept. Various other objects like mirror, statue of Shree Krishna, betel leaves and nuts, kanikonna flowers and gold coins are also kept aside on new clothes. Lighted lamps are also kept.

On the day of Vishu, people awake early in the morning at around 5 am and they see the kani. Each member of the family is taken to the room where kani is kept by the elder member in the family. They are not allowed to see anything else before seeing the kani and so are taken to the room with their eyes closed. It is then followed by giving kaineetom. It is the practice of giving money by the elder members to the younger ones. The children then crack fires.

Keralites usually go to the temple for worship and also see the kani kept in the temples. A feast is then prepared at home. In some parts ofKerala, a function associated with Vishu is Chal which is the starting of agricultural operations. People may follow different customs and manners but the common belief of the keralites that their fortune depends on the item they see first on the New Year is believed by the people from other countries also, in a different form. Example, the Europeans believe that the one who comes to their house on New Year has an influence on the inhabitants for that year.