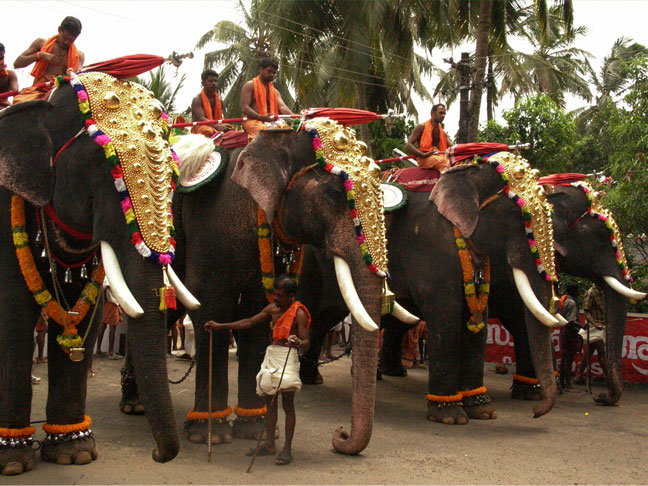 A 10 day long festival is held in Shree Padmanabha Swami Temple in Thiruvananthapuram.The closing ceremony of this festival is called as Arattu. Every year there are two Arattu festival conducted in the months Thulam and Meenam. In Arattu, the statue of the God is taken for procession. The day before the Arattu is the Pallivetta ceremony in which the procession takes place within the temple premises.
On Arattu, the Maharaja enters the temple, after some rituals the procession is carried along with the nadaswaram playing. The Maharaja leads the procession to the Shangumugham beach. He is accompanied by guards, police officers etc. An elephant walks in front of the procession and drum beat indicates that the procession of the God is coming. Around 6 elephants follow the other elephant. The procession starts from the temple at 5 pm and takes around 1 hour to reach the beach. On reaching the beach, the idol is dipped in the sea and the rituals are performed.

The Attukal Pongala festival is conducted from an ancient Bhagavathy temple at Attukal in Thiruvananthapuram. It is performed in the Malayalam month Kumbham on Bharani day and lasts for 9 days. The festival starts with the Thottampattu which is sung on all the days of the festival. The main function takes place on the 9th day where thousands of women from different parts assemble at the temple to prepare a pudding which is given as an offering to the Goddess.

The Kodiyettu utsavam is conducted at Thiruvarattukavu Bhagavathy temple in Attingal in the month Vrishchikam on Makayiram day. It ends on the Uthram day and this festival is dedicated to goddess Bhagavathy.

Sree Narayana Guru who worked for the social evolution fought against discrimination in the name of caste and religion. He emphasized the philosophy of “One caste, one religion and one God for man”. The mutt of Sree Narayana Guru and the Sharada temple is at Sivagiri on top of the Varkala hill. Guru deva Jayanthi which marks the birthday of Guru and the Samadhi day which marks his death anniversary are celebrated from here in the months August and September respectively. These festivals are celebrated well and there are processions, meetings, cultural shows etc conducted along with it. This is a pilgrimage which is visited by a large number of people from all over.

Sabarimala temple is one of the most important pilgrimage centre in Kerala. This temple has the deity Lord Ayyappa and is situated in the mountain ranges of Western Ghats. The people can reach to this temple by walking on foot through the forests. One who plans to visit this temple is required to take a vratham for 40 days. The most important festival of this temple is on the Sankramom on which lakhs of devotees visit this temple. A phenomenon of light called as Makara Vilakku appears on a mountain range at a distance which is believed to indicate the presence of God. Near to this temple there is also the temple of Vavar who was a Muslim friend of Lord Ayyappa. The devotees also worship from this temple.

A famous Siva temple in Vaikkom is the Mahadeva temple. There is a 12 days long festival conducted in this temple in the month Vrishchikam. The Ashtami is celebrated on the final day and on this night the deity from the near by temples will be taken for a procession to this temple.

The Ettumanoor Siva temple is located in Kottayam district. It is believed that the Pandavas and Vyasa had prayed from this temple. The main festival of this temple is the Arattu festival held on Thiruvathira day in the month Kumbham. Thousands of people gather here for the festival and the rush is more on the 8th and 10th day. On these days the 7 ½ elephants called as “Ezharaponnana” which are made of gold are kept for public view. The seven elephants are of 2 feet height and one is of 1 feet height and these were offered to the temple by the Karthika Thirunal Maharaja of Travancore.

An important Siva temple on the Thirunakkara hill in Kottayam is the Mahadeva temple. The main festival of this temple is the Arattu utsavam which lasts for 10 days and is held in the month Meenam.

In the Sree Krishna Swamy temple in Ambalappuzha, the Arattu festival starts with the hoisting of the flag on the Atham day in the month Meenam. The Arattu Utsavam is conducted on Thiruvonam day and an important feature of this festival is the Velakali. The offering made in this temple is the Ambalapuzha Palpayasam which is very famous. 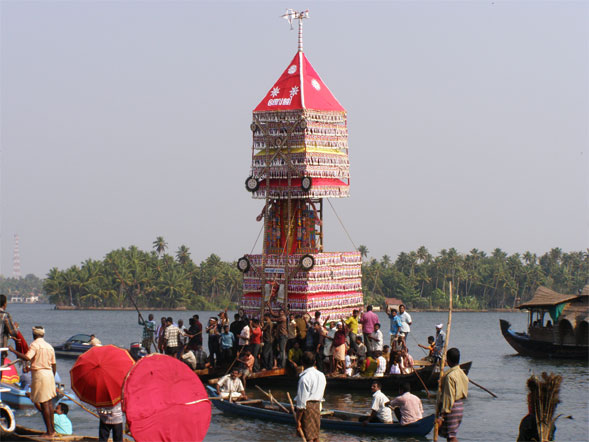 As Kerala has many backwaters, the keralites are very much interested in conducting water carnivals called as Jalolsavam. A famous boat race conducted in Kerala is the Aranmula Snake boat race which is held on the Uthrattathi day in the month of Chingam. It is associated with the Parthasarathy temple and is conducted in connection with the state festival Onam. So the people participate in the boat races irrespective of their caste and religion. The deity is present on all the boats that take part in the competition and all are expected to arrive first. This race is held for not winning any prize. Thousands of people come to view the vallomkali. An important offering in the temple during that time is the Valla sadya.

A famous Devi temple near Kayamkulam is the Chettikulangara temple. The important festival of this temple is the Bharani utsavam which is conducted in the month Kumbham.

A famous Subrahmania temple is the Sree Subrahmaniya swamy temple at Harippad. There are mainly three festivals celebrated here out of which the most important is the Chithira festival which is conducted in the month Medam. The main attraction of this festival is the procession of the golden peacock.

Most of the olden Hindu families have a serpent grove. A famous temple of Nagaraja which is the God of Serpents is at Mannarsala. This temple is believed to have around 30,000 images of Snake Gods. A procession is held on the Ayillyam day in the months Kanni and Thulam in which the idols of the serpents are taken for procession to the home of the temple family. The offerings like Nurum Palum, Kuruthi and cooked rice are made. It is the oldest female member in the family who carries the idol of Nagaraja.

The ancient Koodalmanikkam temple is in Manavalassery in Thrissur district. The idol of this temple is Sree Bharatha which is not commonly found in many temples. The festival is conducted in the Medam month from the days Uthram to Thiruvonam.

Guruvayoor Shree Krishna temple is a very famous temple in Chavakkad and is a major centre for the pilgrims. Some of the important festivals of this temple include the Ashtami Rohini celebrated in the month Chingam to celebrate the birth anniversary of Shree Krishna, Shukla Paksha Ekadasi celebrated in Vrishchikam month, Kuchela day in the month Dhanu, Dwaja Prathishta day on the Makayiryam day in Makaram, Vishukkani in Medam and the ten day utsavam in the month of Kumbham.

Thrissur pooram is one of the most colorful festivals of Kerala. This festival is conducted in Medam. There will be a procession from the Krishna temple at Thiruvambadi and Devi temple at Paramekkavu to the Vadakkumnatha temple. The main event in the festival is the display of fireworks. Each temples display a maximum of 15 elephants. The celebrations start early in the morning till the next day dawns. The festival lasts for 8 days and it is actually a festival of 9 temples known by the common name Thrissur pooram.
For panoramic view of Thrissur Pooram, follow the link:-http://p4panorama.com/panos/trissur_Pooram_Kudamattom/index.html

The festival celebrated in the Bhagavathi temples at Chittur in Palakkad district is the Konganpada. It is conducted on the first Monday after dark lunar in the month Kumbham. This is held to commemorate the success of the Nair caste over the militants of Konganadu which was led by the Chola king Rajadhi Raja.

There is a temple for Goddess Bhagavathi in Chittur where the deity is the Nellikulangara Bhagavathi. The people of this area conduct a festival on the 20th of Meenam month yearly. This is called the Vallanghi Vela.

The Kappally temple conducts the Thira festival annually in Kumbham from 3rd to 13th. The 12th of Kumbham is the most important day.

The famous Lokanarkavu Bhagavathi temple is situated in Vadakara. The two main festivals celebrated are the one conducted in Vrishchikam month called as the Mandalavilakku and the other is in Meenam month.

Kanathurkavu is an ancient temple in kannur district. The annual festival is conducted in April where hundreds of people gather here to watch the Theyyattom which is a dance ritual for the Goddess Mahadevi.

Shree Sundareshwara temple is a famous temple in Kannur founded by Shree Narayana Guru. The deity here is Lord Shiva and an 8 day long festival is conducted here yearly in the months March or April.

The Thrichambaram Shree Krishna Temple is located in Taliparamba in Kannur district. The festival conducted here lasts for 14 days in the month kumbham.