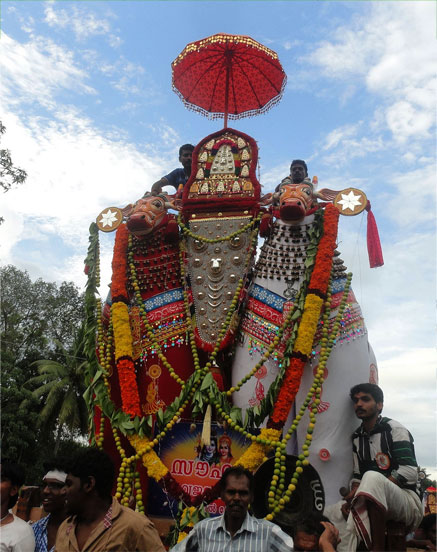 Oachira is a sacred and a historical place in Kerala. This place became famous because it was from here that the famous battle of Kayamkulam was fought between the Travancore King Marthandavarma and the King of Kayamkulam. To commemorate this battle the Oachirakkali is held on the 1st and 2nd of the Malayalam month Midhunam.

Oachira came to be famous because of the Oachirakkali. In the Oachirakkali people both young as well as old from both sides of Oachira come to the Padanilam. They form separate groups and conduct fencing exercise with the leadership of the Kalari Asan. This is conducted in memory of the battle fought. The Irupathettam Utsavam stops with the Oachirakkali. A cattle fair is also conducted as a part of this festival.

In Palakkad, there is a Jain temple near Jainamedu. It is believed that the head of the Jains constructed this temple around 500 years ago for a sage Chandranathaswamy.

In all Jewish festivals, Saturday or Sabbath has prime importance. It is on this day that all the workers take rest. In order to commemorate the formation of Israel as a nation and the freedom of Jews from the Egyptian slavery, a feast of bread is given. This is carried out in April and May. Another Jewish festival is the Pentecost conducted in May and June. This festival has importance both in terms of agricultural and historical views.

A pilgrim festival celebrated in the month September or October is the feast of Tabernacle. It is celebrated during that time as the Jewish New Year starts in that month. In this feast, they set up booths that are covered with palm leaves and decorate with various fruits. This period is considered as a time for self assessment and judgment. Another important day is the Day of Atonement that comes next to New Year. The Jews take fast from the previous day till the next day night. They do not consume even a drop of water. They get engaged in praying. Another famous celebration is the festival of lights called as the Hannukka.

The Nehru trophy boat race is conducted from Alappuzha on the 14th of August. It is an event which is enjoyed by all the people and special pavilions are set up for the audience to watch this race. This boat race was first inaugurated by Pandit Jawaharlal Nehru in 1952; hence it got its name. Different types of boats such as the bean shaped boats, curly headed etc participate in this competition. Silk umbrellas will be kept in each boat and these boats go in procession in the backwaters of Kerala which reminds one of the martial traditions of our state. Separate boat races are conducted for the women participants.

This is conducted in a mosque and here the Juma prayers are held on every Friday. A festival is conducted in the months January and February to commemorate the death anniversary of a saint Uthman Auliya.

In Bhagavathikkavu in Nilamperoor which is a village in Kuttandad, the Padayani Utsavam is conducted. This festival denotes the tradition and culture of our state. This festival is celebrated by the people in a grand manner along with Kolamkettu and Kolamthullal. Kolamkettu is making figures or dummies of Gods and Kolamthullal is a type of dance which these figures perform. The main Kolams that are displayed includes that of Siva, Brahma, Elephants etc.

As Vallarpadam is an islet, it can be accessed only through water. It is believed that the ‘Vallarpadath Amma’ have saved all the devotees from all the catastrophe.  On September 24th annual feast is conducted and there are celebrations that last for more than a week. There is also a big fair conducted. Products like boats, pots, mats etc are sold in these fair.