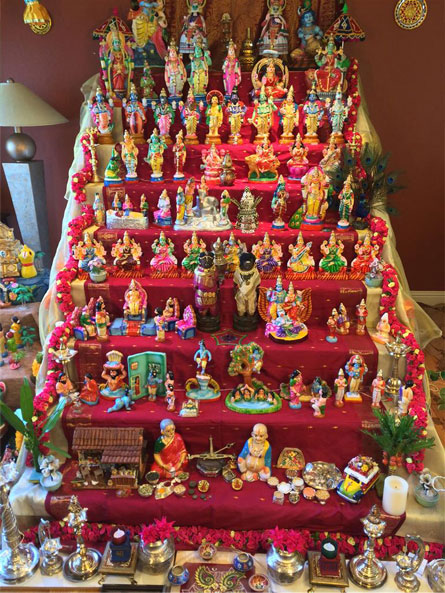 Navarathri is a festival which is celebrated all over India. It is also called as Dussehra, Ayudha Pooja or Saraswathi Pooja. It is dedicated to goddess Saraswathi. Navarathri is observed for 9 days and all these days, Goddess is worshipped by all the devotees. Navarathri comes during the first nine days in Aswina which comes in the months September or October. The final three days are called as Durgashtami, Mahanavami and Vijayadashami. These days are considered very sacred by the Hindus to worship Goddess Saraswathi.

In Kerala, people mainly perform the Saraswathi Pooja and the Ayudha Pooja. Goddess Saraswathi is considered as the Goddess of knowledge and learning. During Ayudha Pooja, all the implements which one uses mainly are worshipped. According to the myths, Arjuna has hidden his weapons in a tree when he was sent into exile. And the people believe that it was on Vijayadashami that Arjuna has taken back these weapons from there after the period of exilation. Arjuna was victorious in the Kurukshetra war and so the people believed that one who starts to learn a work on this particular day will achieve success.

On Durgashtami, the Poojavaippu ceremony is held. It is done either in houses, temples or even in schools. During this ceremony, a room is cleaned properly and decorated where the books are kept neatly. An image or idol of Goddess Saraswathi is also kept in front of it. Students usually keep their books for poojas whereas the working class keeps their weapons or other such implements for performing the pooja. A pooja is conducted and the goddess is offered a dish made of fruits, beaten rice, jaggery, paddy etc. After the pooja is finished, these are supplied to the devotees. When the books and the implements are kept for Pooja Vaippu, all studies and work related to these are suspended until it is taken back.

The next day which is called as the Mahanavami is mainly devoted to worship Saraswathi. Regular pooja and prayers are conducted in the morning as well as in the evening. Prasadams are offered to the goddess after the pooja. On Vijayadashami, a pooja is held in the morning after which the books and other implements that are kept are taken from the room. This ceremony is called as the Pooja Eduppu. The works and studies that were suspended are commenced again. This marks the beginning of the work. It is considered as an auspicious time to start any new works.

This day is also auspicious for small children to start their studies for the first time. They are given instructions to write for the first time on this day. They do this by making them write on rice with their fingers. By doing this they are welcomed into the world of education and knowledge. This is called as the Vidyarambham. As per custom, one steps into the world of education after this ceremony.

Some communities perform the poojas mainly only the last three days of Navarathri, whereas there are some communities who observe poojas and prayers on all the nine days. They collect various images of different Gods, animals, toys etc and are arranged in a beautiful manner and decorate it well. This is called as the Koluvaippu. It is very beautiful to see Sree Padmanabha Swami Temple at Thiruvananthapuram during Navarathri. On all nights of Navarathri, musical concerts are conducted at the Navarathri mandapam. Several carnatic musicians participate in this. This is now considered as a cultural event which was initially started by Maharaja Swathithirunal.