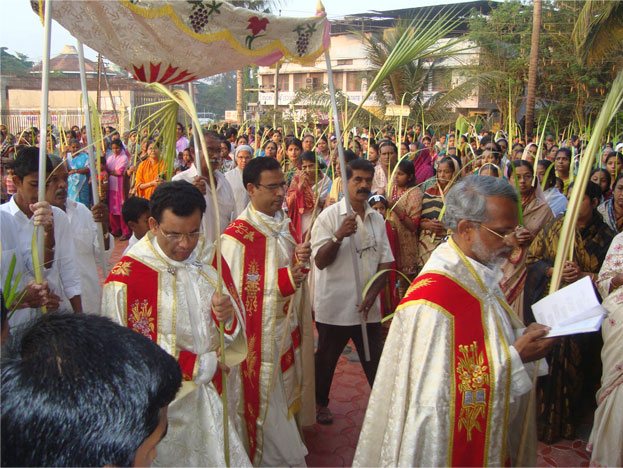 Easter is a Christian festival which began to be celebrated a long time back. The main belief of Christianity rather than the birth of Jesus Christ is his resurrection. It was believed that Jesus Christ resurrected on the third day after his crucifixion. In order to commemorate this, Easter is celebrated by the people all over the world. The date of Easter is not fixed and it is determined based on the lunar calendar. Easter normally comes in March or April and it falls on a Sunday.

In Kerala people celebrate Easter in four different periods. They start with the Lent during which the devotees observe fasting for around 40 days. During fasting, the Christians avoid taking non vegetarian foods. It is then followed by the Holy Week consisting of Holy Thursday, Good Friday, Holy Saturday and Sunday. The next period is the Octave of Easter in which many children are baptized. Finally comes the Easter.

The Easter celebrations start a week before the Easter called as the Palm Sunday. It is then followed by the Holy Thursday and Friday. The Thursday before Easter is called as Maundy Thursday or Holy Thursday. It commemorates the Last Supper of Jesus with his Apostles. An important trait performed is the washing of the feet which emphasizes love. At homes, after having supper, a cross cake is cut into several pieces which is then broken and dipped in sauce. It is then fed to each members of the family.

The next day is called as Good Friday or Holy Friday. It was on this day that Jesus Christ was crucified. And so it is a day for grief and the church will be empty and dark. In churches a drink which is bitter in taste is offered to the devotees. It is prepared using some leaves and vinegar which is served in the afternoon after the service in the church.

Holy Saturday is a day for crying and mourning. There will be complete silence in the church. The church will be filled with people by midnight to observe Easter. In church a big candle is lighted from which several candles are lighted which indicates resurrection. Prayers are conducted and various hymns are sung. The celebrations for Easter are usually spiritual rather than making it social. The houses are filled with joy and peace. The people then have a grand dinner at home.