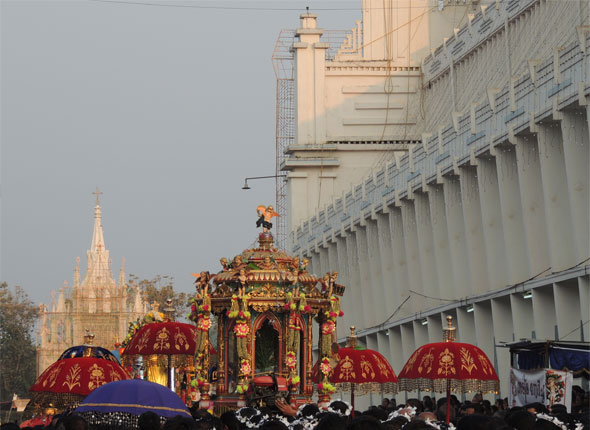 A sacred church in Kerala namely, St. Andrew’s Forance Church is at Arthunkal. Thousands of devotees from all parts of India come to this church irrespective of their religion. One of the main celebrations is the feast of St. Sebastian and it lasts fro 11 days. The crowd here becomes difficult to manage leading to great confusion on January 20th which is the final day of the feast. So in order to avoid that, the church authorities have started a minor feast on the 8th day of the celebrations. This is called by the name Ettaam perunnal. This feast is also important as the main feast.

Bharanamganam is a village in Kottayam district. It is famous and is considered as a holy place in Kerala. This place was a refuge to the poor, miserable and for the faithful. The famous church St. Mary’s Forane church is located here. It is one of the oldest churches in Kerala and is dedicated to Mother Mary. It is visited by thousands of devotees from all over the country. One of the main festivals of this church is the Feast of Our Lady of Mount Carmel which is celebrated on November 9th. On 20th November the Feast of St. Sebastian is also celebrated.

The Edappally perunal is celebrated in a Forane church in Edappally. Forty hour devotion marks the time for beginning the festival. The festival is celebrated on the 23rd of April and begins with a High Mass and Litany. The flag is hoisted on 25th.

On the banks of River Pamba in Edathua lies the St. George’s church. An annual feast called as the feast of St. George is conducted during the Malayalam month Medam from April 27th to May 7th. The festival takes place for 11 days but the main functions are carried out in the last 2 days. So the feast is conducted on 6th May.

Kadamattom church is located near Moovattupuzha. There are two feasts conducted here. They are the feast held in the Malayalam month Makaram and the one held in Medam. The two days feast conducted in Makaram is important. It is performed to commemorate Kadamattathachan who was the founder of this church. He is famous for performing several wonders.

St.Mary’s church located in Kallooppara has some similarities to the Kallooppara Bhagavathy temple. The church is inscribed with some inscriptions in Pali language. The two main festivals celebrated here are the Palli perunnal on 15th of January and the church foundation day on July 5th.

There is a St. Thomas shrine in Malayattur in Ernakulam district. It is an ancient catholic shrine and it is situated on top of a hill which is about 2000 feet high. The second Sunday after the first moon after the Vernal Equinox i.e. March 21st is celebrated as a main festival here. The feast is conducted in April or end of March. The next Sunday is celebrated as Octave.

Manjinikkara Church is situated in Pattanamthitta and it is famous for the tomb here. It is the resting place of the late holy Patriarch of Antioch, Mar Ignatius Elias III. The people believe that he was a saint and this church has become one of the important pilgrimage centre. The Orma Perunal is conducted annually in the February month.

Maramon and Kozhencherry are the two place in Thiruvalla that are famous centres for Christian culture. The leader for the reformation of Syrian church namely Palakkunnathu Abraham Maplah was born in Maramon. This place has been the venue for the Maramon convention which is considered as the largest Christian gathering in Asia. Annually the Maramon convention is held from the banks of the River Pamba in February. This convention is an example that denotes the cooperation between the various sections of churches in our state. It acts as a source for spiritual inspiration for the people.

Niranam is a village which lies in Pathanamthitta district and is considered as a holy place. It has its own traditions both in terms of social, cultural, political and literary manners. It is believed that St.Thomas has visited here and had built the church here. The main festival of this church is honoring Mother Mary and is celebrated on August 15th. Celebrations are done on 8th September for the birthday of St.Mary and on 3rd July the feast of St. Thomas is also celebrated.

In St.Thomas cathedral in Pala is celebrated what is called as the Rakkuli Thirunal in memory of the Epiphany feast and is celebrated yearly on January 6th. Thousands of pilgrims gather at this church for this celebration and exhibitions are conducted which includes various articles.

In St. Dominic Syrian Church situated in Aluva, a feast is conducted annually on the third Sunday after Easter. During the celebrations, the statue of the Saint is taken for procession. Another feast held is the feast of “Our Lady of the Holy Rosary” on the Sunday following December 8th.

The festival celebrated in Vettukad church of Thiruvananthapuram is the feast of Christ. This feast lasts for 11 days and ends on the final Sunday of October. A 1 ½ hour long procession is carried out on the 10th day after the church prayers. A mass is conducted on the last day followed by procession and benediction. Around 50000 come to attend this feast.

The yearly feast at the St. Joseph’s shrine in Meppadi is conducted on the final Sunday in the month January. There is a procession on the eve of the feast.

In Thumboly there is a church called St.Thomas church and is dedicated for Mother Mary. The statue of Mary here is called as ‘Kappal Karathi Amma’. The feast lasts for 11 days and ends on December 8th following a procession.