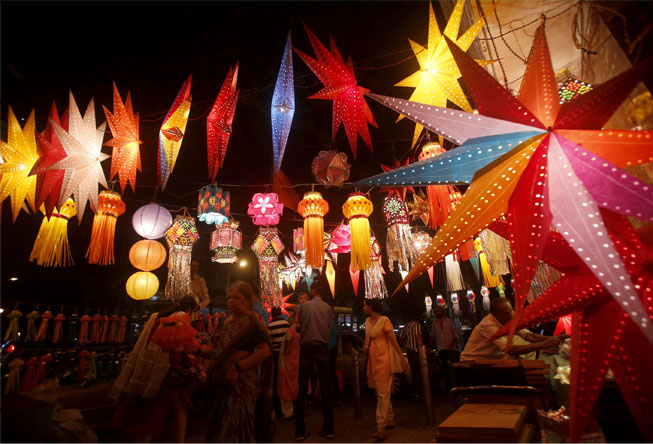 Christmas father is considered to be a most important person who is accompanied by many children. He is an important figure who is believed to bring Christmas gifts to the children. He is called as Santa Claus or Santa in short. During Christmas celebrations, usually someone gets dressed as Santa and participate in the celebrations. The appearance of Santa is that of an old man with a fat belly and is dressed in red clothes with white border. He carries a stick decorated with balloons and a huge sack which are filled with gifts for children.

Each and every house will be decorated with a Christmas star. During the start of the Christmas season, almost all the stationary shops will be filled with new and variety Christmas stars. The stars are also decorated with a colored bulb so that it is visible during the night and looks very attractive. People prefer various colored and attractive stars. Christmas star is hung in houses in order to denote the pointer star that revealed the birth of Jesus and pointed the way to the three wise kings. Stars are used to decorate the Christmas tree, crib etc. It is a symbol for peace and happiness.

An important symbol for Christmas is the Christmas tree. There will be a well decorated Christmas tree in the houses during Christmas season. The tree is fresh and is green in color which is usually decorated with various colored bulbs and lightings. Together with these, several objects like toys, small balls, cards, figures of angels, Christmas father, Christmas star etc are hung in this tree.

Another main part of decoration during Christmas is the crib which is nothing but a miniature of the stable where Jesus was born. It is created in order to represent the scene of the nativity. It is set up near the Christmas tree. People create a crib using hay and wood. Figures of infant Jesus, Mother Mary, Joseph, angels, sheep, shepherds and three kings are arranged in the crib.

A holiday wreathe is another decorative item which is hung in front of the main door of the house. It is used to give a warm welcome to the guests and create a Christmas atmosphere.

On Christmas Eve, carols and songs are sung by the devotees and they fire crackers. Mass is conducted in churches and it starts at midnight. On the day of Christmas a grand feast is prepared and the main dish is the meat. Another main item is the Christmas cake and people cut the cake and have them. Thus, Christmas is celebrated well in all its glory and cultural forms.