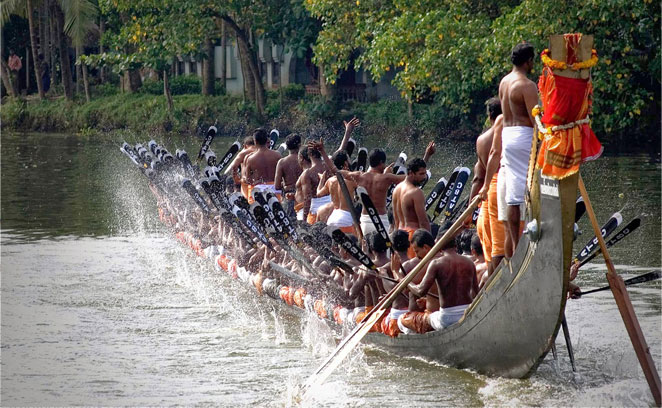 Aranmula Boat Race or Aranmula Vallomkali is held during the Onam festival during the months August / September. It is held from the river Pamba in Aranmula in Pathanamthitta district. It is from near the famous Hindu temple Aranmula Parthasarathy temple that this boat race is conducted.

The snake boats of Aranmula are called as Palliyodam which are considered by the devotees as a vehicle of the deities of the Aranmula Parthasarathy temple. The Palliyodams belong to various Karas or areas and are all beautifully decorated with flags and umbrellas.

The boat race and festivals conducted here is considered as part of religious beliefs and are not as competition. As part of the temple festivals there are mainly 3 events where the Palliyodams take part. They are on Thiruvonam, Uthrattathi and Ashtami Rohini Vallasadya.

On Thiruvonam, special boat called Thiruvonathoni will start from Kattoor in the previous day evening at 6 pm and it reaches the Aranmula temple by 4 am on Thiruvonam day. This boat has all the required items for a meal and a burning lamp in it. This Thiruvonathoni is welcomed by thousands of devotees near Aranamula and they float lighted lamps in the river. The Thiruvonathoni is accompanied by the Palliyodams.

Another festival conducted is the Ashtami Rohini Vallasadya which is the serving of feast to the oarsmen of the boats from the Aranmula temple. There will be a parade of the snake boats before the feast. The devotees are also served feast during vallasadya.

It is on Uthrattadi day that the snake boat race is held. The anniversary of the installation of the idol in this temple by the Pandavas falls on this day. There is a story behind the Uthrattadi Vallomkali. According to the legend, there was a Brahmin who decided to feed atleast one pilgrim a day. One day Lord Krishna came to this Brahmin as a pilgrim. Overjoyed by seeing Lord Krishna the Brahmin promised to offer 51 measures of rice and other items for making the Thiruvona Sadya at the Aranmula temple. These items were to be carried across the river in boats which were seized by some opponents. Later the villagers came for his help and the items were carried in Palliyodams to the temple. The Aranmula Uthrattadi Vallomkali began from then on to commemorate this.

The Aranmula Uthrattadi boat race is a two day festival. On the first day water carnival is conducted and on the second day, boats representing different Karas or areas assemble at the temple. The race then begins on the second day afternoon. The oarsmen in each boat sing songs and participate in the race. It is an exciting experience to watch the snake boats moving to the rhythm of songs and shouting by the people. Around 30 to 40 snake boats participate in the boat race annually. The oarsmen are traditionally dressed and are accompanied by singers.Thousands of people gather on the banks of the river Pamba to enjoy this boat race. Even though it is a festival of Hindu temple, people irrespective of caste and religion participate in this festival.