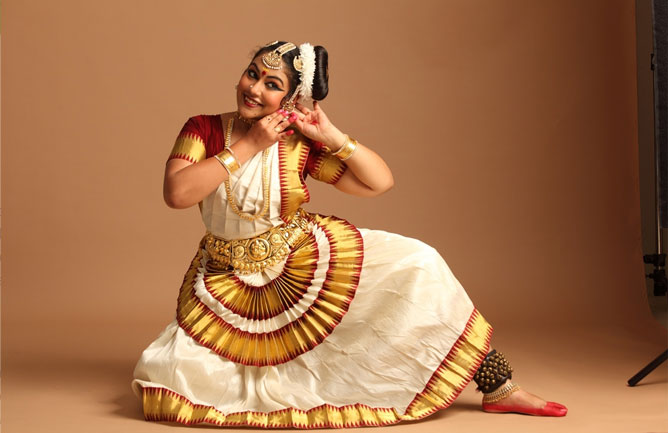 Mohiniyattam is a dance which is related to Bharathnatyam and has originated in Kerala. The word meaning of Mohiniyattam is ‘dance of enchantress’. It is derived from the two words ‘Mohini’ which means a ‘feeling of delight’ and ‘Attam’ which means ‘graceful body movements’. It is a dance form that has the elements of Bharathnatyam, Kuchipudi and Odissi dances. It is a semi classical dance form which tells the story of Mohini who was a Mythical character.  It is a classical female dance and was believed to have originated in the 18th century. Earlier Mohiniyattam was performed only in temple. During the reign of Swathi Thirunal of Travancore in the 19th century, there was an improvement and growth in the dance form Mohiniyattam. Main contributions have been made by Swathi Thirunal, Irayimman Thampi and Kuttikunju Thankachi. After his period it gradually declined. It was the great poet Vallathol who had saved Mohiniyattam from its extinction. Hence, Mohiniyattam became a subject of study in the Kalamandalam.

Mohiniyattam has simple costumes and makeup which is semi realistic. The costumes and ornaments are similar to that worn by the female artists of Koodiyattam and Kathakali. The performer wears sandal color jacket and white sari bordered with golden color and wears a make up which is yellow and pink in color. The hair is neatly tied up and jasmine flowers are worn over it. The main theme for Mohiniyattam is the love towards God thereby portraying feminine love. The God here always is Vishnu or Krishna. The main expression that is explored here is the Sringara. The dancer portrays the God through facial expressions, hand gestures and soft body movements.  The Mudras used are same as that in Kathakali. The invocation of this dance is called as Cholkettu. Some of the other items used in this play are Jathiswaram, Varnam, Padam and Thillana. The music is sung together with the help of musical instruments like Mridangam, Violin, Veena and Edakka. The lyrics for the song are written in both Malayalam and Sanskrit known as Manipravalam. It is worth watching the performance of Mohiniyattam by mature actors.