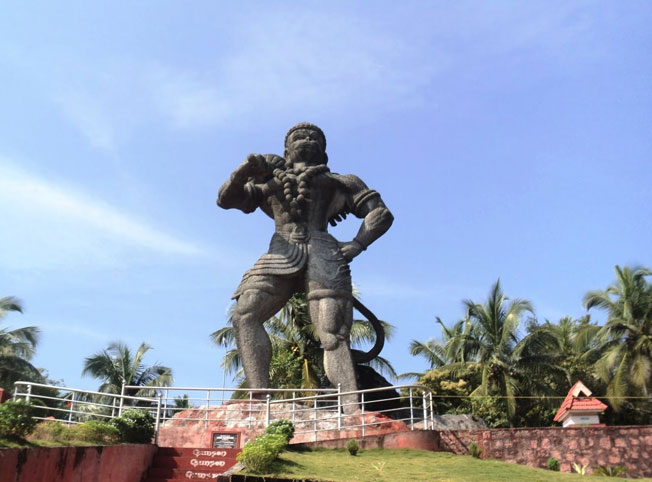 The sculptures of Kerala are created and designed for decorative purposes. The sculptors of olden times were artists who were engaged in carving and creating any new items. They make such carvings on stones and rocks. The creations of these artists are excellent work forms. An example of a sculpture made in stone is the three figures which are seen in the cave temple at Kaviyoor. This sculpture is of 8th century. Another sculpture during the same period is the rock cut sculpture at Vizhinjam. It has close similarity to the works of the Pallavas. There are stone carvings at the Edakkal caves in Sulthan Battery. These carvings include various figures of both animals and humans and certain symbols used by the people. The period of creation of these carvings are not yet found. The sculptures of southern part are influenced by the Pandyans whereas that of the northern part is influenced by the Pallavas.

The sculptures are usually seen in temples of Kerala. The typical sculptural works include figures of gods, animals and dancers. A sculpture of the 11th century is the vyali panels that depict two dances found in the Vishnu temple at Thrikkodithanam in Changanassery. The two types of dances are the Kudaikuthu and Kudakuthu. In ancient temples in Thiruvananthapuram, it is possible to find the statues of Dwara palakas which are designed in black granite. The idol of Lord Vishnu at Guruvayoor temple and Sree Padmanabha Swami temple in Thiruvananthapuram are some of the best examples of stone sculptures. In this temple, the masterpiece works are seen at the Kulasekhara mandapa and the Siveli mandapa. Figures and scenes from the epics and puranas are executed in an excellent manner. Some other works seen in temples include the Parasurama shrine at Tiruvallam, Siva temple at Kandiyur, Haripad Subramonia temple and many others. The sculptures in Parasurama shrine include figures of animals like lions and elephants. The Siva temple at Kandiyur depicts myths and legends from puranas. In Haripad Subramonia temple, we can find the stone image of Lord Hanuman.

Stone sculptures of Buddha are found from places such as Karumadi, Mavelikkara, Maruthurkulangara and Pallikkal. This stone sculpture is greatly influenced from the Buddhist art in Sri Lanka. Similarly many Jain images have been obtained from Kallil, Chitaral, Sultan’s Battery and Pallikunnu. All these are evidences of sculptural heritage of our state.

Along with stone carvings, we can also find the wood carvings in some temples. These wood carvings are seen in the namaskara mandapas. Figures of navagrahas are engraved on the ceilings and the beams are also carved with scenes from puranas. The Subrahmonia temple at Kidangur and Haripad has Kuthambalams which are famous for their wood carvings. In some temples, even the walls are made of wood with carvings on them. Some of the temples with wood carving works include The Mahadeva temple at Katinamkulam,  Narasimha temple at Chathankulangara, Sree Krishna temple at Trichambaram etc.

Apart from the temples, sculptural works can be seen in churches also. In churches we can find the cross which is carved on granite platforms. This can be seen in churches like Kaduthurthi , Changanacherry, Kanjur, Angamali and Kuruvilangadu. Another work that is found in all the churches is the scenes showing the crucifixion of Jesus Christ. An example of stone sculpture is the basin used for performing Baptism. The Persian cross which has wings ending with floral designs is a unique piece of sculpture. Such Persian crosses can be seen in churches at Kadamattom, Kottayam, Parur and Alangad. Wood carving works are also seen in certain churches. The churches famous for having wood carvings are The St.Thomas church at Mulanthuruthi, Cheriapalli at Kaduthuruthi, St.George’s church at Edappalli etc.  The masterpiece work at Mulanthuruthi church is the depiction of the Last Supper carved in wood.

There are many great sculptors in Kerala. One of the famous sculptors of our state is Kanai Kunjiraman who has created several beautiful and rare sculptural works.