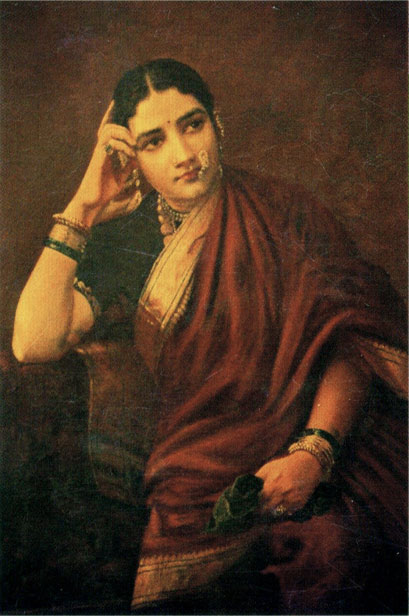 The tradition of Kerala can be seen from the earliest murals and is found in a small shrine in the Travancore region. The ruler of Travancore Swati Thirunaal showed great interest in the art of painting. An art that is regarded as the specimen is the murals of Tirunandikkara in Kanya Kumari District. It is of Pandiyan origin. Even in churches of Kerala we can find various valuable pieces of paintings. Before paper and ink were introduced, the Palm leaves were used for making any inscriptions or pictorial representations.

A unique art from that exist only in Kerala is the Kalamezhuthu. It is a pictorial art which is drawn when certain religious rituals are performed. It is a temple art and in order to draw these pictures separate patterns and colors are chosen as per tradition. Usually mythical figures are drawn based on various factors in a traditional way. Kalams are drawn to worship Goddess Devi, Naga, Lord Ayyappa etc. The picture of deities is drawn on the floor using mainly five colors. The drawing consists of patterns with various dimensions and colors and each and every tiny detail in it are mandatory. Strict rules are followed while making this picture such as what color to be used for a particular body part, the order in which the picture has to be completed etc. The pictures are drawn by hand and do not use any tools for this purpose. The drawings are made using various colored powders which are natural. They are obtained either from vegetables or minerals. For example, to obtain white color, rice is used. Similarly some other substances used to obtain various colors include turmeric for yellow color, charcoal obtained from paddy husk for black color, a mixture of lime and turmeric powder for red color and green color from powdered leaves.

The churches also have several paintings that denote the character from the Christian mythology. There are paintings of Virgin Mary at the Edappalli church and Vechur. This is of great significance to the devotees.

A well known personality who is outstanding in the field of painting is Raja Ravi Varma who is considered as the Prince among Painters. His interest in Painting led to the establishment of Raja Ravi Varma College of Fine arts at Mavelikkara. It was started by his son Rama Varma and this college comes under the Technical education department. Various famous painters have studied from this college. Some of them include C Ra, Artist Valiyathan, Thrivikraman Thampi, Kochukutty, Gopala Pillai, N N Nambiar,Shankara Menon, T V Balakrishnan Nair, Balan Nair etc. All of them have followed the same tradition as that of Raja Ravi Varma except C Ra.

C Ra and Porinchukutty have started the Lalithakala Academy after the Chitrakala Parishad. Porinchukutty was also the Vice Chairman of this Academy and was talented in semi-abstract paintings. The Kala vidyalaya in Thiruvananthapuram later became the College of Fine Arts and is under the University of Kerala. Another famous painter was Kodungallur Madhava Menon who made arts with realistic details. The watercolour works made by him gained wide appreciation from around the corner. In 1967, K C S Panicker established the Chozhamandalam-Village of Arts at Mahabalipuram. An Art village was also started by M V Devan in New Mahe in 1992. Both of them have started such institutions in order to get artists respect from the society. Some of the artists who practiced a different style in painting include C N Karunakaran, Artist Namboodiri, Chirayinkil Sreekandan nair etc. K V Haridas used water colors and oil paintings according to the Indian tradition in water color and oil paintings. He is excellent in making tantric symbols with geometrical perfection and also in applying various color combinations. K. Madhava Menon and K.C.S. Panicker were two outstanding painters. K Madhava Menon was brilliant in portraying plant and animal life.

Raja Ravi Varma is a famous painter who is famous for his works depicting the scenes from Hindu epics Mahabaratha and Ramayana. Alagiri Naidu who was a well known painter from Madurai was the artist in Swathi Thirunal’s court. He taught the techniques of painting to Raja Raja Varma of the Kilimanur royal family. He in turn trained his nephew Raja Ravi Varma. Raja Ravi Varma was also given training in European oil painting by the famous European oil painter, Theodore Jenson. This helped him get International acclaim. He has done numerous pictures of Gods and Goddesses which can be seen in most of the homes in India even today. The paintings made by him were a blend of Indian tradition and European art. He portrayed beautiful women wearing sari in a graceful way. He considered South Indian women as most beautiful and so pictured them as Hindu goddesses. His works gained wide acceptance world wide and was exposed mainly in the west after he won the first prize at the Vienna Art Exhibition in 1873.