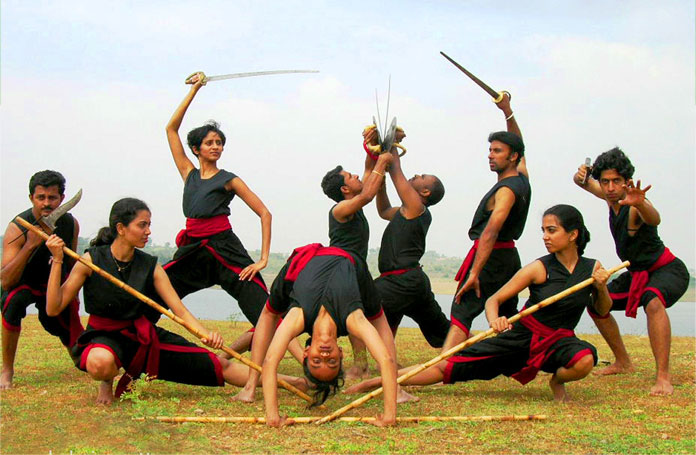 Kerala is very famous for its various martial arts form and sports. In the olden times, the martial arts are taught from places like Gurukul. Here the students come at a very young age for getting trained in various martial art forms. It takes years for a student to get well trained in martial arts. The training includes rigorous exercises, physical fitness and yoga for mental and physical strength. The trainer also teaches subjects relating to Ayurveda and also various healing techniques using herbs. It is necessary because the student must be able to heal himself in case of any ailments before preparing for a competition. The student should have good knowledge in various fighting tactics and defensive methods. For this they must know the internal functioning of the nerves, joints and other body parts. Philosophical training is given for better focus and mind concentration. In total martial arts training is a separate study of its own and requires lot of effort and years to become perfect. Some of the well known martial arts and sports of Kerala include Kalarippayattu, Parisa Kali, Velakanni, Vaaleru, Kunderu and Njaninmel Kali.

Free hand combat is done along with that various implements are also used in these martial arts. Some of the weapons include knives, bow and arrow, sword, stick, long and flexible spring like sword called urumi etc. Display of martial arts has now become a part of festivals and important occasions. Martial arts have importance in the history as well. In olden times, any disputes in Kerala during the rule of the kings were settled in battle or betting in martial arts competitions.  The martial arts have helped in promoting tourism in Kerala. This is because many tourists from different parts of the world come to Kerala to study the various martial art forms of Kerala.

It is an old form of martial arts. The meaning of the term Kalaripayattu is the fighting art of the Kalari. This fighting is one part of the ayurvedic physical treatment in Kerala called the Kalarichikitsa. The origin and introduction of Kalaripayattu is still unknown.  It is believed that in 350 A.D. this martial art was carried away across the Himalayas by a Buddhist monk named Bodhi Dharma to give rise to another art named Chinese Kung Fu.

In Kalaripayattu the students are taught to handle various weapons and also to fight with hand. It requires special skills such as concentration and attention. It is at the same time dangerous to learn using weapons. It is said that in order to become a Guru or master one has to pass seven levels. Those who learn Kalaripayattu can get rid of physical problems. There are many training centres where Kalaripayattu is taught. Some of the important centres are at Ettumanoor, Kanjirappally, Pala, Thiruvananthapuram etc.

Another main martial arts of Kerala include the Parisa Kali from North Malabar and Velakanni from Travancore area. Velakanni is used to represent the war between the Pandavas and the Kauravas during the Kurukshetra war. It is used played during the festivals at Cherthala temple and Ambalapuzha temple.

Vaaleru is a martial art in which sword is used for combat. This martial art form is worth mentioning.

Njaninmel Kali which is the tightrope walking performance is done mainly during the temple festivals in Kerala. It is very famous in Kerala.