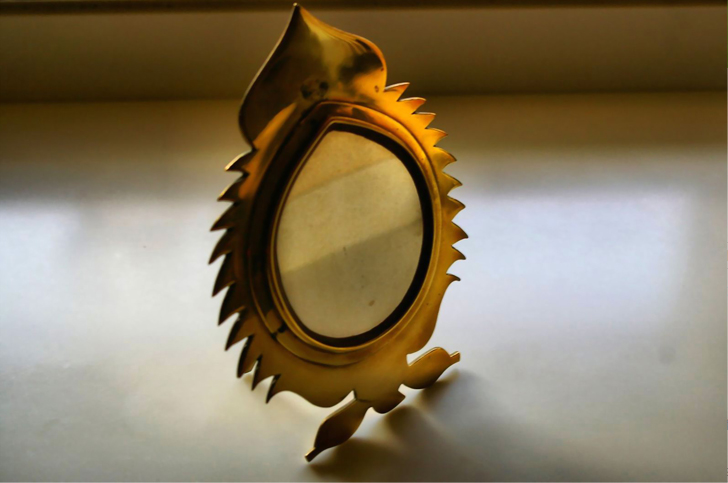 Aranmula kannadi or metal mirror is a special type of mirror which is made of metal. It is not made of glass instead it is made of bell metal. It is made from alloy of lead, copper and some other undisclosed metals. The bell metal is polished well until it shines. Aranmula kannadi is a front surface reflection mirror. Mercury is coated on the bottom layer from where the image gets reflected. In normal mirrors, the image gets reflected due to the silver coating at the rear end. It is believed that one can see their real image reflected only from the Aranmula kannadi.  The Aranmula kannadi is so famous and in great demand that there is an 18 inch Aranmula metal mirror placed at The British Museum in London.

Aranmula metal mirror is manufactured from the place called Aranmula, hence it is named so. It requires well skilled craftsmen by utilizing their technical skills to produce this mirror. Unique manufacturing methods are needed to make Aranmula mirror which makes it the only metal mirror available world wide. The artisans use low technical methods to manufacture this. The method of manufacturing Aranmula kannadi is obtained from one generation to another. It is an inherited gift and so its making is kept as a family secret. As this is a unique object, its creation is also mysterious and the beauty of these mirrors is incomparable with anything else.

In order to mould this material, the mud is taken from the paddy field. The alloy mixture is poured into this mould for making the mirror. Extreme care has to be taken for the manufacture because even with great care around 60% of the casted metal can be used for making the mirror. The remaining may get damaged during the process. Jute cloth is dipped in a mixture of burnt clay powder and special oils and is then used for polishing the metal. The metal polished so well that it may take days to make the metal reflect like a mirror. When the metal is polished well, it is mounted over any decorative and beautiful frames.

The production of metal mirror started right from the 18th century. These metal mirrors were introduced long before the appearance of silicon glass mirror. This metal mirror manufacturing is confined in the village of Aranmula. Its origin is believed to be connected with the Aranmula Parthasarathy temple which was a part of the Pamba valley civilization. It was believed that there were eight families who excelled and were engaged in the temple art in Sankarankoil which is located in the Tirunelveli District of Tamil Nadu. They were called upon by the local Royal Chief of Aranmula to work in the Parthasarathy Temple long back. These artisans during their work discovered the unique reflective property of an alloy of copper and tin. But they could not find out the exact composition. The history also says that Parvathi amma, a widow came to know about the composition of these alloys through a dream.