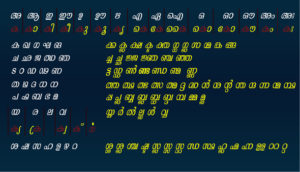 Malayalam is the language of Kerala and is one among the 22 official languages in India. About 35 million people speak malayalam and stands in eighth position depending upon the total number of speakers. The people who speak malayalam are called malayalees. The natives of Lakshadweep which is a union territory on the western coast also speak malayalam language. The meaning of the word ‘Malayalam’ is ‘land of mountains’. It is derived from two words ‘Mala’ and ‘Alam’ where ‘Mala’ means mountain and ‘Alam’ means land.  The spelling of ‘Malayalam’ in English forms a palindrome. In Malayalam language there are 53 characters out of which there are 37 consonants and 16 vowels. In writing, there are two lipis. The old and the new. The new lipi replaced the old one in 1981. The number of characters in new lipi is less compared to that of the old.

The five main languages that form the South Dravidian family are malayalam, tamil, kota, kodagu and kannada.  Malayalam is not an ancient language instead it is the youngest of all the other in the Dravidian family.  The malayalam language is almost similar to tamil language and it took around four to five centuries to become a distinct language from its Tamil-Malayalam variant. The language used for administration and scholarship were Tamil and Sanskrit. These languages have influenced the malayalam language for its development. Some Indo-Aryan features were also used by malayalam after the coming of the Brahmins.

The Malayalam vocabulary has taken words from a large number of languages. It took words from Tamil and Sanskrit. The coming of the Europeans has influenced the malayalam language and so it has taken words from English, Portuguese, Dutch etc. Out of the words borrowed from other languages, Sanskrit has the first position followed by English. At the same time some malayalam words have been used in other languages also. Some of the words like coir, copra, catamaran etc are originally malayalam words.

VazhappaLLi inscription is the oldest among malayalam records. Kolezhuthu is the Malayalam script and it is derived from the Grandha Script. Malayalam language has 37 consonants called vyanJanam and 16 vowels called swaram. The new lipi was used to type the Malayalam words using typewriter. This lipi has lesser number of characters. There are numbers in Malayalam language but are not used nowadays.
The pronunciation of Malayalam in various regions is also different. The accent, grammar, vocabulary etc of a person of one region is different from that of another from a different region. Malayalam is a regional language spoken by the people of Kerala and the total population who speaks malayalam is less compared to other languages. Even then there are 170 newspapers, 235 weeklies and more than 550 monthly periodicals published in Malayalam. Malayalam newspaper is the most circulated regional language daily newspaper in India.
Today there is a great trend for the people from Kerala to migrate to other countries. This has helped to spread the language to abroad as well. Malayalam language is taught in educational institutions outside Kerala.