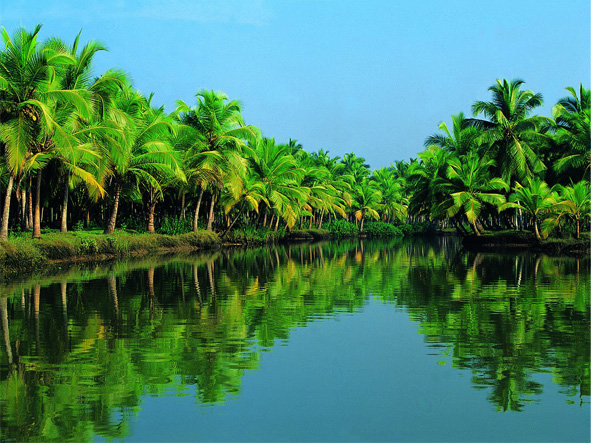 In Kerala, coconuts are used largely in the delicious cuisine. Coconut is consumed in many ways. The tender coconut juice is drunk as fresh. The flesh of tender coconut is soft and that it can be eaten raw. Whereas the mature flesh is mainly used while preparing curries. They are grated and grinded and are then added to curries. People in Kerala prefer to cook food in coconut oil. This oil is extracted from the dry flesh of coconut. The usage of coconut oil for cooking gives a special and distinctive taste to the cuisines in Kerala. The coconut is dried in the sun and the flesh is removed from its shell. This is called as copra which is stored either to extract oil, to use in cookery or as an offering in temples. A favorite drink of the Keralites is toddy or fermented palm wine, which is extracted from the coconut palm. Some of the dishes that are prepared by using coconuts are chutney, avial (mixed vegetable curry) and fish moilee. It is difficult for a true malayalee to imagine a life without coconut. To know the taste of delicious Kerala cuisines one can enjoy it on their tour to Kerala.

The coconut tree (Cocos nucifera) forms a major part of the landscape of Kerala. When you travel to Kerala it is possible to find coconut trees here and there. It is a part of traditional lifestyle and economy of Kerala.The coconut tree is very useful in many ways. Each and every part of this tree can be used. The uses of the coconut fruit has already been mentioned above. The traditional and old fashioned houses in Kerala use the trunk of the tree for building the beams. The palm’s leaf is used to thatch the houses. It is also used in handicrafts for weaving mats, baskets, and many other household articles. Coir is produced from coconut which is then woven to make ropes, doormats etc. The thick hard shell of the coconut is used to make spoons and ladles. As it is useful in many ways coconut trees are essential in the traditional lifestyle of the people of Kerala.