Maranaya occurs in the Nilgiris hills and parts of the Western Ghats and is the only species of marten found in Southern India. It is about 55 to 65 cm long with a tail as long as 40 to 45 cm and weighs about 2.1 Kg. It is diurnal and descends to the ground occasionally. It is omnivorous and likes coffee beans. They prey on hare, squirrel, barking deer, mouse deer, birds and insects such as cicadas as well. 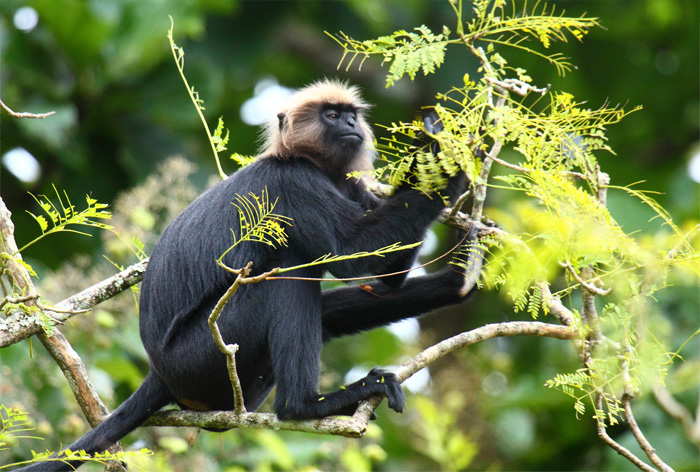 The nilgiri langur is seen in the nilgiri hills. They are dark black in color with females having a white patch of on their thighs. They are commonly found in evergreen, semi evergreen and moist deciduous forests of the Western Ghats. They live in groups of five to 16 monkeys. They move towards agricultural lands and their diet includes fruits, leaves and shoots. They are poached for flesh as they have medicinal properties.

Hanuman langurs are large grey monkeys with a black face. It is considered to be related to Hanuman, monkey deity. They are the most widely distributed among monkeys in India and the largest monkey species seen in Kerala, adapted to forest habitats as well as plains, villages and towns. They prefer dry deciduous areas. Males grow up to 75 cm long and females up to 65 cms.

The lion tailed macaque is considered to be a symbol of silent valley. It is a climber and is seen most of the time in the upper canopy of tropical moist evergreen forests. They are found in hierarchical groups of ten to twenty consisting of few males and many females. It is endemic to South India and is one of the most endangered species of primates. They are also seen in the evergreen forests and their populations in Thenmala and Silent Valley constitute less than 2000. The hair colour of macaque is dark brown or black with a silver white mane that surrounds the head which is black coloured.

The Bonnet Macaque is a macaque which is endemicto southern India. They are used in biomedical research. They are adapted to live near human settlements, villages and even in towns. They are considered to be a pest of agriculture in the high ranges of Kerala. They live for about 30 years. They feed on fruits, nuts, seeds, flower etc.

Tiger is our National animal and is the largest in the genus Panthera. They are bulky with great power and their important feature is the pattern of dark vertical stripes overlaying the reddish orange fur. The male tiger in South India weigh around kg. 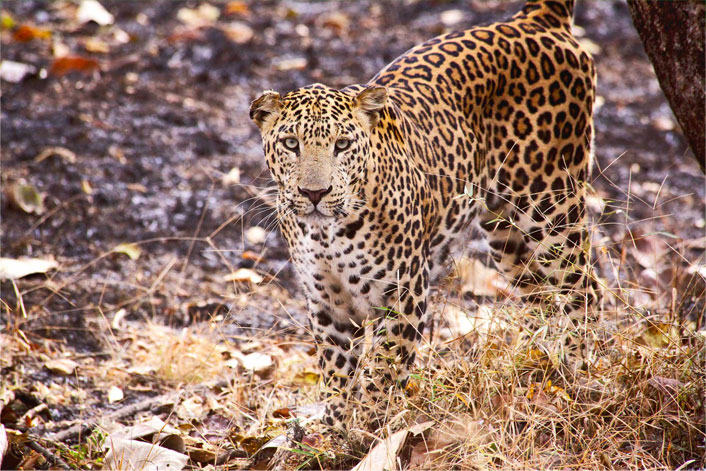 The leopard is the smallest animal in the genus Panthera. Their legs are relatively short and have a long body. They look similar to the jaguar with fur marked with rosettes as those of the jaguar. They can adapt to various habitats, can run at a speed of around 58km per hour, can climb large trees easily even when carrying a heavy carcass. They have a great ability for stealth and that makes it a successful survivor and also to hunt various animals.

The Travancore Flying Squirrel is a flying squirrel which was thought to be extinct but was again discovered in 1989 after a span of 100 years.

The grizzled giant squirrel is a large species of squirrel most restricted in its distribution. The species is found in patches of riverine forest along the Kaveri River and Chinnar wildlife sanctuary. The IUCN lists this species as near threatened due to habitat loss and hunting. They have a length of around 25-45 cm and are the smallest of the giant squirrels in India. It has small rounded ears with tufts visible.

The Malabar giant squirrel or the Indian giant squirrel is a huge diurnal, arboreal and herbivorous squirrel which is endemic to Western Ghats. They dwell in upper canopies and do not leave the trees often. They travel from one tree to another by jumping at a height of 6m. When they are prone to any danger they freezes or flattens themselves against the tree rather than fleeing. Its predators include birds of prey and leopard. The front legs and under is cream coloured with a head colour brown or beige and a white spot between the ears.

The Malabar verugu was found in the lowland coastal tracts of Kerala and Karnataka earlier. But now they have reduced in their number. They are used for producing civetin musk. In the recent years isolated populations of this species survived in the less distributed areas of South Malabar. They are listed by the IUCN as extinct; even then this civet was again found in Elayur near Kozhikode.

Porcupines are rodents that have sharp spines or quills on their body which helps them to defend from predators. They are large and are found in rocky grasslands and in scrub jungles. They feed mainly on roots and shoots of plants and are also harmful pests of agriculture and plantation crops in Kerala.

The nilgiri tahr is a mountain goat, found in the Western Ghats and the Nilgiri hills. It is also known as the Nilgiri Ibex. It is a highly endangered animal and is inhabited in Eravikulam National Park. They are also seen in Ponmudi Ibex hill. Many efforts have been taken to conserve them which resulted in the increase in their number. Their colour is dark black with a light white colour chest, belly and throat. These have horns that curve backwards and are about 40 cm long in male and 30 cm in female. The adult male Tahrs are also called as Saddle Back as they have a silvery white colour on their back portion. They are mainly seen in open terrain, cliffs and grass covered hills.

The barking deers are inhabited in the tropical regions and the specific barking calls of them heard at intervals help to identify its presence in the forests. It is seen mostly in singles and rarely in pairs. The deers mate at any time of the year. The males have short antlers that can regrow. They fight for their territory using tusks. The Indian Muntjac is the mammal with the lowest chromosome number. The male have 7 chromosomes while the females have only 6.

The Indian chevrotain or the mouse deer is the smallest among the deers in India. It is cloven hoofed animal, major distribution being in the forests of South India. Its narrow, pointed hoof marks can be identified near water holes, easily. They do not have horns or antlers. They possess enlarged upper canines and the canines of males are sharp and project from the sides of the lower jaw. They have pig like features which includes lack of facial scent glands, premolars and their sexual behavior. The legs are short and thin.

Malaman  is also called as Mlavu or Kalaman. It is a large, dark brown, maned Asian deer and is the largest deer species found in India. Adult stags grow upto 150 cm at shoulder level and may weigh as much as 546 kg. They are seen in mixed sex groups. In Kerala, this species is the one which is the preferred prey of the tiger and the wild dogs. 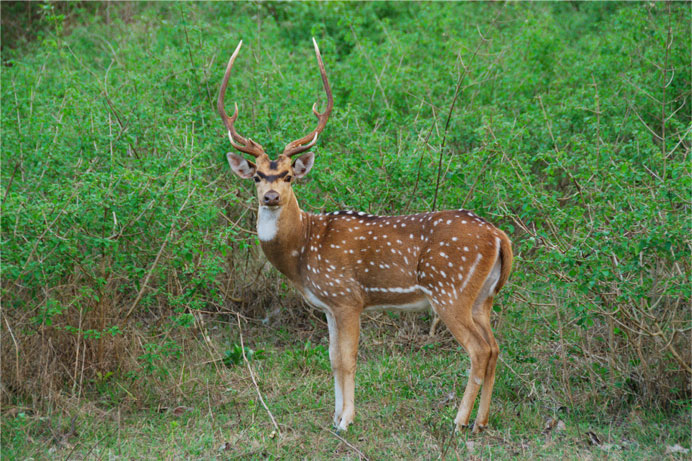 The chital or the spotted deer is the most beautiful among the deers and is the commonly found deer family in India. They are seen in large groups of 30-50 females with a few stags. They attain a height of about 90 cm at the shoulders and weigh up to 85kgs. They have a life span of 20-30 years. It is one of the preffered preys of tigers and leopards. Even though their population is abundant, they give birth to one fawn at a time. They are nervous animals and are always cautious about any approaching danger.

The wild boar has a wide distribution in the whole of the Indian subcontinent. It is seen in all forest types and in agricultural areas in the high ranges in Kerala. It feeds mainly on roots and tubers. Other plant parts, insects, small animals, carcasses etc. also form the food of the wild boar. It is a serious pest of agriculture in the high ranges in Kerala destroying large extents of paddy, tubers, banana etc.

The goar on the Indian bison is seen in some of the forests in the Western Ghats. They forage over large areas of all types of forests, usually in herds of 6-20. Larger and smaller herds are also seen. They are very powerful animals. Old bull is oily black, whereas other males and females are light brown in colour. Their white feet and mouth and nostril areas are species specific. Poachers kill the bison in large numbers for flesh.

The dhole or the wild dog is one of the common predators of all forests of India. It is a diurnal animal and lives in pack. Deers are its favourite prey. Wild dogs can chase and prey on large animals such as sambar deer and gaur.