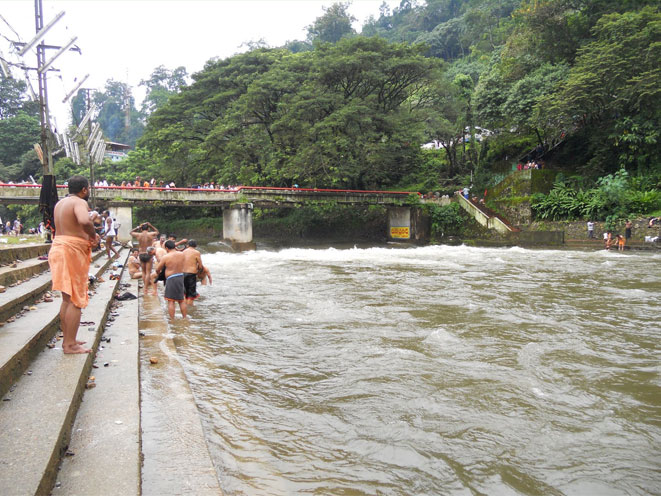 Pamba River which is popularly called as Dakshina Ganga is the third longest river in Kerala. It has a length of 176 kms. This river spreads in Pathanamthitta district and the Kuttanad in Allapuzha district. The Pamba River originates in Pulachimalai of the Western Ghats. It then flows through regions such as Ranni, Ayroor, Pathanamthitta , Kuttanad etc and then finally ends up in to the Vembanad Lake. Kuttanad which is popularly called as the Rice Bowl of Kerala is famous for the rice cultivation, and the water for irrigational purposes is available from this river.  Pamba basin is surrounded by Western Ghats on the east, Manimala river basin in the north and Achankoil river in the south.

The famous Sabarimala temple is located on the banks of this river. It has got significance in the Hindu religion as it is believed that Lord Ayyappan has appeared as a child on the river banks. It is considered as sacred to take a dip in this river as the people believe that it would wash away one’s sins. So the Ayyappa devotees take bath in this river which is considered as equivalent to taking a bath in the River Ganga. Perumthenaruvi waterfall which is a famous picnic spot is located on the banks of the river.