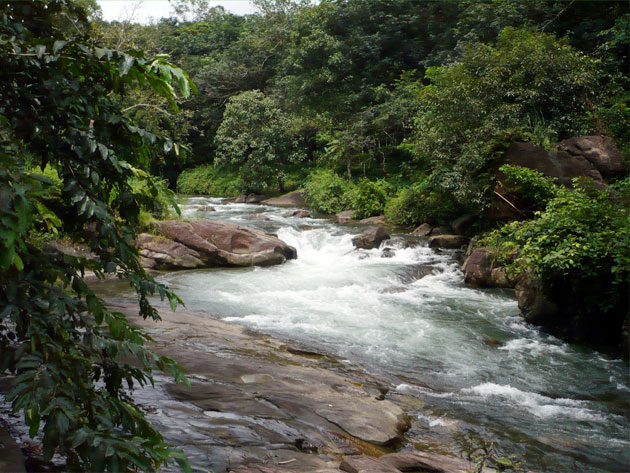 Meenachil River is in Kottayam district. This river is formed by the streams that have originated from the Western Ghats. Some of the places through which this river flows are Poonjar, Teekoy, Erattupetta, Palai, Ettumanoor and Kottayam. This river which has a length of 78 kms ends at the Vembanad Lake in Kumarakom. This river is considered to have around 38 tributaries both big and small. The water from this river is used for drinking purposes and irrigational uses. In olden days water transport facilities were there, but with the development in road transport this has reduced.

Meenachil River is also called by other names such as Gauna Nadi, Kavanar and Valanjar. This river is believed to be a holy river as the name Meenachil is derived from the Madurai Meenakshi Devi. There are many temples in the river banks and in most of the temples during festivals the Arattu ceremony takes place. It is the ritual in which the deity is taken for bath in the river and Poojas are conducted from the river banks.

In order to divert the water from Meenachil River to the Idukki dam, The Kerala State Electricity Board has constructed two tunnels near the Wagamon. There are some serious issues that affect the environment of the Meenachil River basin badly. Some of them are disposal of wastes, construction of dams, mining of river sand, illegal fishing, diversion of water to Idukki dam etc. During monsoon, the water from this river floods the low lying areas and during summer the water gets completely dried up causing draught. The width of the river is increasing due to soil erosion.

A tragic accident that took place in Meenachil was the bus accident in which a bus carrying 40 passengers fell into the Meenachil River on 23rd March 2010. Around 11 persons are believed to be killed in the accident.