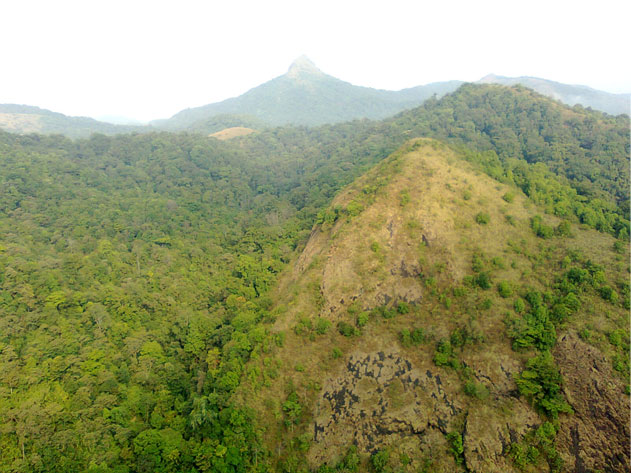 Silent Valley National Park is located in Nilgiri hills in Palakkad district. This area was explored by a botanist named Robert Wight in the year 1847. It consists of rain forest and tropical moist evergreen forest. The rain forest area is at a height of 1000 m above sea level and forests called as Sholas are at a height of 1500 m.

Earlier the Kerala State Electricity Board has put up plans for setting up a hydroelectric project in this area. As it is a threat for the rich wildlife, an environmentalist Social Movement called as the ‘Save Silent Valley’ was started in the 1970s. This resulted in cancelling the project and the Silent valley was declared as a National Park in the year 1984. Silent Valley is a bio diversity hotspot. The visitor center in this park is at Sairandhri.

This area is popularly called as Sairandhrivanam meaning Sairandhri’s forest. This has got some relation with the Hindu mythology. According to the myth Draupadi, the wife of the Pandavas was disguised as Sairandhri during their exile. They believed to have stayed in a cave near to this place. Hence, this place is called as Sairandhri. Similarly there is a river called as Kunthipuzha which flows through this forest. It derived its name from Kunthi, mother of Pandavas.

The area is inhabited by some tribes such as the Mudugar and Irula. People from these tribes work as porters and forest guides etc. Several rare species of animals are found here. Hence it is called as the ‘Richest expressions of life on Earth’. This is an ideal place for nature loving tourists. Silent valley is famous for the Lion tailed Macaque which is an endangered species. The other animals found here include tiger, elephants, leopards, nilgiri langur etc. Besides there are several colored butterflies, reptiles etc.

This park is declared as polythene free zone and so the visitors are not allowed to carry polythene bags into the park. There are leeches found in this area. This insect would stick on to the body and bloat on the blood. So it is advised to wear high angled boots while on your trip to this park. The starting point for Silent valley is Mukkali which is at a distance of 23 kms. The visitors can engage in trekking after getting prior permission from the forest department. They provide the trekkers with a guide to accompany them in their whole trekking journey.