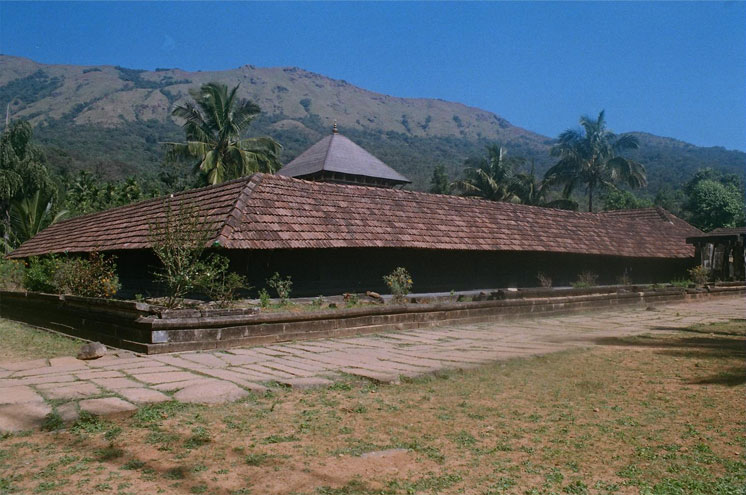 Sree Thirunelli temple is located in Brahmagiri hill in Wayanad district. It lies at a height of 900 m above sea level. This temple is dedicated to Lord Vishnu. Exact dates of the establishment of this temple are unknown and it is believed that it is around 3000 years old. The word Thirunelli is derived from the Malayalam word ‘Nelli’ which means Gooseberry. This temple has been mentioned in the Puranas. This temple lies in the Sahya valley and so it is also referred to as ‘Sahyamalaka Kshetram’ in these Puranas. The architecture of the temple is marvelous with 30 granite pieces that supports the shrine and huge blocks of granite are laid on the floor.

According to the legend, once Brahma while travelling happened to pass through this beautiful valley. He saw an idol of Lord Vishnu on a ‘Nelli’ tree and considered this place as Vaikunta, the place of Vishnu. Brahma then with the help of other Devas, installed this idol here in this valley. Vishnu said that the water in this area would wash away all the sins and thus the river nearby came to be called as ‘Papanashini’ which means one that wash away all the sins. It is believed that taking a dip in this water would wash away one’s sin. Parasurama came to this temple to perform the last rituals of his father when he was deceased.

There is a pond in the temple premise called as ‘Panchatheertham’. There is a huge boulder in the centre of this pond having the image of a footprint. It is considered to be the footprints of Vishnu, hence the name Vishnupada. Thirunelli temple is an important destination where many come to perform the last rituals of a deceased person. Many pilgrims come for this purpose especially during the full moon day of the Malayalam month Karkkidakam, Thulam and Kumbham. This temple is popularly called as ‘Kashi of South’ or the ‘Thekkan Kashi’. The festivals celebrated in this temple include Shivarathri, Navarathri and SreeKrishna Jayanthi.