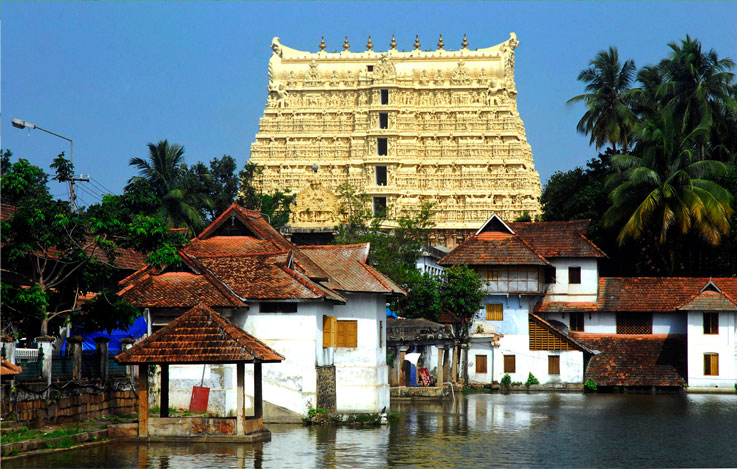 Padmanabha Swamy Temple is located in East Fort in Thiruvananthapuram district. The deity here is lord Vishnu and the idol is in the Ananthashayanam posture. This idol which is made up of 10,008 Saligramam is 18 feet long. This Saligramam is plastered with Kadusharkara Yogam which is a mixture of ayurvedic herbs. This idol is accompanied by a serpent. This idol was brought to this temple from Nepal. The idol is very large that it is seen from 3 different doors.

A unique feature of this temple is that the idol is present here in all sitting, standing and reclining postures. The reclining posture can be seen through the 3 doors. The standing posture can be seen through the Central door and the sitting posture is that of Utsava Murthy. The idol is fully covered with gold ornaments except the face and chest. Besides Lord Vishnu some other deities are also present here which includes Lord Narasimha, Krishna, Ayyappa, Ganesha and Hanuman.

The legend behind the Padmanabha Swamy temple is that once Lord Krishna in the form of a little boy appeared in front of the sage Divakara. The boy swallowed a Saligrama which the sage decided to use for performing the poojas. The sage got angry and he chased the boy who hid behind a tree. The tree fell down and the original form of Lord Vishnu appeared. The sage realized his mistake and begged forgiveness to the Lord. He asked the Lord to reduce his size. Lord Vishnu reduced his size and asked the sage to worship him through 3 doors. Lord Shiva can be worshipped through the first door, Brahma through the second door and the feet of Vishnu through the 3 door.

The renovation of this temple was made by King Marthanda Varma. This temple has a huge Gopuram and there is a pond nearby called as the Padma Theertham. The Gopuram is 7 tiered. The corridor to this temple has several granite stone pillars which are beautifully carved. The walls of the temple are decorated with mural paintings. In front of the main entrance lies a flag staff which is 80 feet in height. The entrance to this temple through the eastern side is called as the Natakashala. It is here that various art forms such as Kathakali is performed during any festival.

A ritual called as Lakshadeepam which is the lighting of lakhs of lamps is conducted here once in 6 years. It is conducted on the Makara Sankranthi day. Prior to that the Murajapam which is the continuous chanting of prayers that lasts for 56 days are conducted. There are 2 main festivals that are celebrated here. They are the Alpashy festival that is held during the months October / November and the Painkuni festival that is held during the months March / April. Another festival conducted here is the Navarathri festival that lasts for 9 days.

In 2011, the secret chambers of the temple were opened inorder to inspect the items that were kept inside them. Gold, silver, precious stones and other valuables worth more than 1 Lakh crores were obtained from the cellars. Among the items unearthed include coins used in Napolean Era, coins of East India company, golden idol of Lord Vishnu, precious stones such as Ruby, Emerald, Corals etc. The correct estimation of the treasure has not yet been confirmed. At present the current market value of the items have alone been estimated. If the antique value is also taken into account then the value will be 10 times the current estimated value. The value of the treasure had made this temple the richest temple in the world. This temple has 6 cellars named A to F out of which A and B were never opened in the past 100 years. So far only the chamber A has been opened and the chamber B will be opened after making a final decision of the date of opening it.
To take the panoramic view of the pond of Padmanabha Swamy Temple, follow the link:-
http://p4panorama.com/panos/padamatheerthakulam/index.html