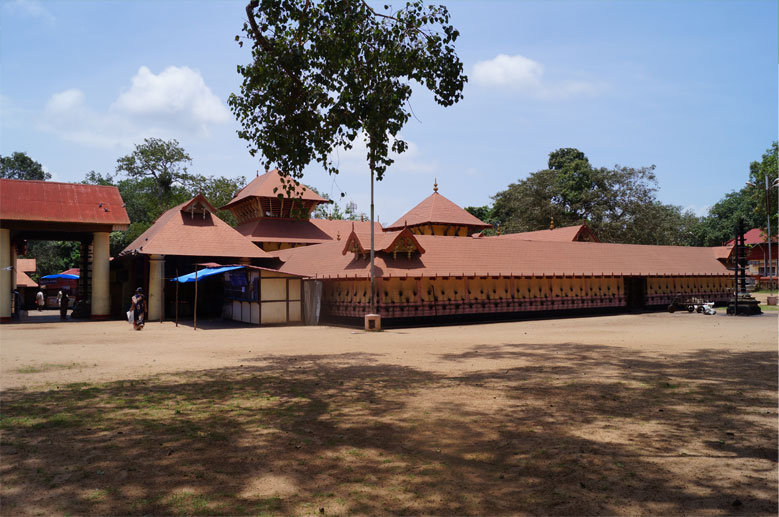 Kodungalloor Bhagavathi temple is located in Kodungalloor in Thrissur district and was constructed during the rule of the Chera. The deity here is Kannagi and it was built by the Chera ruler Cheran Senguttuvan. This temple is managed by the Raja of Kodungalloor and is at present under the administration of the Cochin Devaswom Board.

Kannagi is an incarnation of goddess Kali or Durga. The idol which is about 6 feet tall is made of jackfruit tree. It wears a crown and the face is covered with a mask. This idol has 8 hands which hold various weapons. The idol is fully covered with gold ornaments. There is also an idol of Lord Shiva and it is a practice to worship Shiva first and then to worship the goddess. Another deity that is present here is that of the Kshetrapala which is present in the courtyard. This idol is around 12 feet height and made of stone.

According to the legends, this idol represents Kali who killed the demon Dharuka. Dharuka prayed to Brahma and received a boon after which he started harassing the Devas. In order to kill him, Lord Shiva created Kali who then killed this demon.

This temple is famous for the Bharani festival and Thalappoli festival. Thalappoli festival is a harvest festival similar to the Pongal festival of Tamil Nadu. It is held during the Malayalam month Makaram. On the day prior to this festival all unwanted materials are burnt off and home and surroundings are kept clean. During this festival a fare is conducted for 4 days starting on the day of Makara Sankranthi and includes processions on elephants and fireworks. On the last day of the procession, many women also join the procession carrying a thaalam or a plate full of rice and coconut. An offering made to the deity here is pepper and turmeric powder.

Bharani festival is conducted in memory of goddess killing Dharuka. It is held on Bharani day during the Malayalam month Meenam that falls on the months March / April and lasts up to 7 days. A flag is hoisted around a month prior to the festival. That day is used to denote the beginning of the war between goddess and the demon. A day before the festival, all the ornaments of the idol will be removed and Poojas will be performed. The festival starts with ‘Kozhikkallu moodal’ that involves sacrifice of cocks. Next is the ‘Kaavu theendal ‘in which ‘Velichappads’ holding sabre swords run to the temple by shouting and abusing the goddess using bawdy language. The idol will be purified the next day as she is considered to have accepted the abusing. Another flag will be hoisted to mark the victory of goddess. The temple will be closed for the next 6 days and then reopens on the 7th day. It is considered auspicious to visit this temple on this day. Another festival is the ‘Chandanapoti Charthal’ in which the idol will be smeared with sandal paste.
To take the panoramic view of Kodungalloor Bhagavathi temple, follow the link:-http://p4panorama.com/panos/kodungallor/index.html