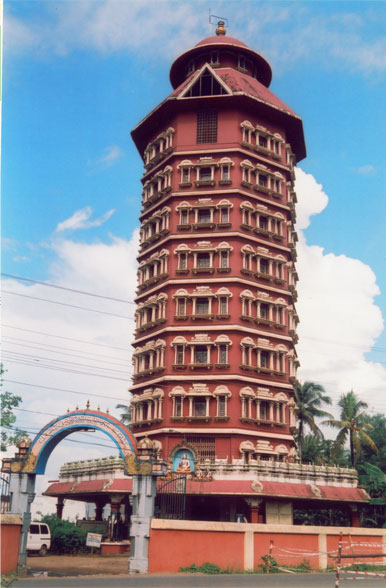 Kaladi which is located in Ernakulam district is the birth place of Adi Shankara who was a philosopher saint. Kaladi is near to river Periyar. It is believed that many miraculous things have happened in the life of Adi Shankara. The legend behind this pilgrim centre is that while the mother of Shankara was returning home after taking bath, she fainted. Shankara was a small boy then and feeling helpless he prayed to Lord Krishna. Lord Krishna was melted in his prayers and he blessed the child by saying that the river would flow where his feet touches the ground. Thus the Periyar River had a new course on the boy’s foot mark and this place came to be called as Kaladi.

Some of the main places to visit in Kaladi include the Shankara temple, Ramakrishna Advaita Ashram, Sri Adi Sankara Keerthi Sthamba Mandapam etc. There is a bathing ghat called as Crocodile Ghat where a crocodile caught hold of Shankara’s leg and tried to pull him into the river. Shankara needed his mother’s permission to become a Sanyasi and so he asked his mother to grant him permission, so that the crocodile would leave him. Helplessly his mother had to agree to that and he was freed from the crocodile catch.

Shankaracharya of Sringeri built a temple around the Samadhi of Aryambha who was the mother of Adi Shankaracharya. There is also a shrine of Adi Shankara that is run by the Sringeri math. There are two shrines here one for Adi Shankara and the other for the goddess Saradambha. Near to the temple lies the Ramakrishna Advaita Ashram. There is a statue of Sree Ramakrishna which is made of white marble. The ashram has various schools and other institutions under their control. Another memorial is the Adi Sankara Keerthi Sthamba Mandapam which is an eight storied building. There are two statues of elephants near the entrance leading to the Paduka Mandapam.

People irrespective of caste and religion can come to this pilgrim centre. The festivals conducted here include the Shankara Jayanthi which is a 5 days long celebration held in the month of April / May and the Navarathri celebrations.