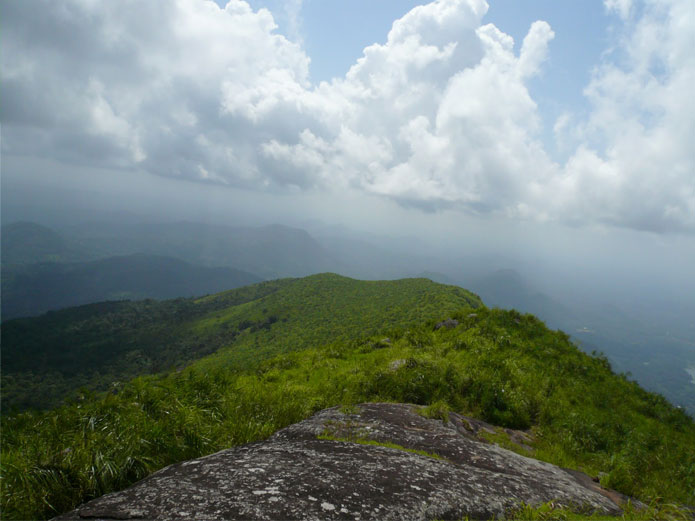 Elaveezhapoonchira is a beautiful valley situated in Kottayam district. It extends to over several acres and lies at a height of around 3200 ft above sea level. Here there are many mountain ranges having rocky cliffs. It lies between the three hills Mankunnu, Kudayathoormala and Thonippara. The huge hills found here are Vindhyanmedu, Hidumbanmedu, Mankallumudi, Kolanimudi and Mukalanthumudi. The word meaning of Elaveezhapoonchira is ‘the valley where the leaves do not fall’. This place is named so because there are no trees in this place. It is the only place in Kerala where one can see both the sunrise and sunset from the same place. The horizon enables us to see around five districts from the top of it. During monsoon season, the view of the Malankara dam from here is a treat for the visitors.

The mountains in Elaveezhapoonchira are all of different elevations and have various shapes. Below the hill lies a small pond which is called as the Poonchira. According to the legend, it says that Panchali took bath from this river. At this place there are tribes settled and there are also some natural caves in this area. It is believed that the Pandavas lived in this cave during their exile and so this cave is called as the Pandava Guha. Many plants which have medicinal properties are found here. There is a cave called as Nilayara in Mukalanthanmudi hills which has the peculiar feature that around 20 persons can stand in the cave at the same time. A stream is also found flowing through the cave. Kannadipara is an attractive mountain range here. The valleys of Kannadipara reflect the rising sun perfectly. It is said to be the highest point of Elaveezhapooncira. An attractive feature of this place is the Kazhukankulimali waterfalls. Mankallumudi has hills which lie close to each other. There are no trees in this region. It is possible to see around 7 districts of Kerala from the top of this hill.