One of the main tourist attractions of India is the Kerala backwaters. The backwaters extend to about 1500 kms. They are a chain of canals and lagoons which are natural and manmade. The large network of waterways is interconnected with rivers, lakes, lagoons etc. The Kerala coastal area extends to about 900 kms and the water bodies flow into the Arabian Sea. There are about 41 rivers in Kerala that are west flowing. The legend says that the land of Kerala was formed in the power of the axe of the sage Parasurama. The backwaters are formed by the action of the sea waves. 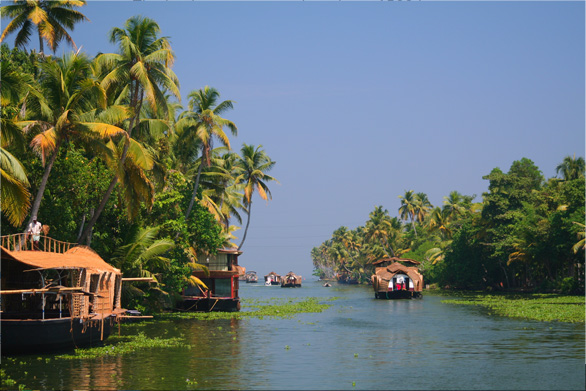 The beginning and end points of the backwaters are towns and cities. The starting point of the backwaters is the Alappuzha through which we reaches the Kuttanad which is popularly known as the rice bowl of Kerala. Almost all the districts in Kerala can boast off a presence of the backwater. Some of the districts through which the backwater flows are Alappuzha, Thiruvananthapuram, Ernakulam, Kottayam etc. The largest lake in Kerala is the Vembanad kayal. It is surrounded by the districts Alappuzha, Kottayam and Ernakulam. Ernakulam area is famous for the backwaters because of its enchanting beauty and it is this area which is most accessible. It is where the Cochin harbor is. The backwaters here seem to be very calm and are easily navigable due to the presence of several islands which are connected by bridges. These islands prevent the waves from entering the backwaters. The uniqueness in the ecosystem of backwaters is that the rivers are fresh water which meets the sea water in the sea. In some backwaters like the Vembanadu kayal, a barrier is built near Kumarakom so that the sea water does not get mixed with the fresh water of the rivers, thereby maintaining the water as fresh. These types of fresh waters are used for irrigational purposes.

As there are numerous water bodies in Kerala, jobs like boat building, sea food cultivation etc are done on a large scale. Fishing is one of the main industries in Kerala. The backwaters are a habitat for several species of aquatic life which includes crabs, frogs, turtles etc. The shores of the backwaters are covered with various types of trees and bushes which gives greenery to the surroundings. The backwaters are used for transportation as well.

Backwater is a favorite destination of all the tourists. The tourists mainly visit these backwaters to enjoy the scenic attractions of the backwaters and also to spend some time in the houseboats. The backwater destination is a combination of both towns as well as historic places. There are several tour packages for the tourists which are preferred by most of the tourists. This also involves tour on houseboats which enables you to enjoy the beauty of the backwater and its surroundings. Houseboats with various facilities will be available for hire. This houseboat journey is considered to be a wonderful experience which one gets during his lifetime.

Ashtamudi Kayal is located in the Kollam district of Kerala which is a deep and large wetland ecosystem. The area that surrounds this backwater is very beautiful and is covered by greenery. It is one of the popular tourist destinations and many visit here to cruise the backwater in houseboats. There are also some islands here called as the Munroe islands, Chavara south etc. People get a great opportunity to enjoy the scenery of our state on their cruise in the houseboats.

Chandragiri backwater is in the Kasaragod district of Kerala. Even though not on a large basis, some tourists visits this backwater to cruise and enjoy the beauty of nature.

In Alappuzha district there are backwaters which are famous for their busy coast lines and the boat race. One of the main reasons the tourists gather here is to enjoy the Nehru Trophy snake boat race competition conducted every year during the Onam festival.

Vembanad Kayal is the largest lake in Kerala and is the longest lake in India. It has become a major tourist attraction and is visited by tourists from all over the world. One of the things that attracted the tourists to this place is the backwater cruise in houseboats. It flows through three districts in Kerala namely Alappuzha, Kottayam and Ernakulam.

Thiruvallam is a famous tourist backwater destination in Thiruvananthapuram district. The two main rivers that flow to thiruvallam is the Killi and karamana rivers. This backwater is famous for canoe riding. A tour through the thiruvallam backwaters is a memorable one to all those who visits there.

Kochi has a very good harbour right from the ancient times. The lake that surrounds Fort Kochi is the Vembanad Lake and the people can use ferry boats to travel through this lake. There are many small islands between Fort Kochi, Mattanchery and Ernakulam. The backwater cruise is done around islands like Bolgatty, Vyppin, Gundu and Vallarpadam.

Valiyaparamba is a backwater stretch in Kasaragod district and lie about 30 kms away from Bekal. It consists of many islands and four rivers are joining here.

Kumbalangi is a fishing village that is situated in Ernakulam. Kumbalangi has a very vast backwater stretch which is interconnected by waterways. The land is separated from water with the presence of large mangroves.

One of the famous and a major backwater of Kerala lie in Kottayam district called as the Kumarakom backwaters where many rivers and lakes flow into the Vembanad lake. Kumarakom is situated around 15v kms from the Kottayam town. Vembanad lake is situated in Kumarakom and its importance as a tourist destination is increasing at a fast pace.