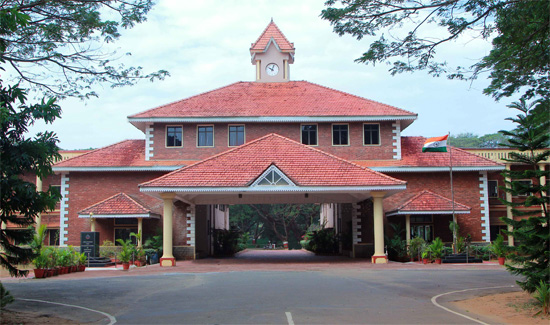 The Kerala Police Academy at Ramavarmapuram, Thrissur was started in May, 2004. It is headed by the Inspector General of Police.; He is assisted by DIG. In order to coordinate the Indoor, Outdoor and Technical training of Kerala Police Academy, five assistant directors are there. It is the main training center for the Kerala police. Full term courses are available for the recruits which includes sub-inspectors, constables, women constables, drivers and telecommunication wing constables. There are short-term courses and in-service courses available for various ranks. It has the capability to train all officers of police department including IPS officers. They gives training in Management, Traffic, Communication, Computers, Swimming, driving, Transport and Forensics. They also conduct seminars and workshops on various current topics.
The total area of the academy is 348 acres (1.4 km2). It is designed to have a capacity of training 1950 trainees of various ranks at a time. It is one of the highest in India.

The Academy has so far trained over 11,000 personnel of various ranks. The main administrative block building is of 90,000 square feet floor area. It consists of an air conditioned conference hall, 3 a/c seminar halls, 16 big and 7 medium sized classrooms and 2 computer labs. The accommodation at the Academy includes the Senior Officers’ Mess, a Subordinate Officers’ Mess and the Mess for the constabulary. Kerala Police Academy is about to revise the content and methods of Police training. Every person who joins Kerala Police has to undergo basic training at the Kerala Police Academy. They will be taught to use a Computer, to drive a Jeep Motor cycle, drill and musketry, to handle and use wireless set, to write reports, to safeguard the special needs of women and children, to know more about weapons and explosives, to handle traffic secure measures,to be proficient in unarmed combat, to acquire the skills and knowledge about Forensic Sciences, to answer properly on telephone, to swim, to communicate with others in a non offensive manner.

A Forensic Science Lab is present for training in “Scientific Aids to Investigation”. There is a Model Police Station in the Academy. It is the true replica of an actual police station. It is helpful for the trainees to role-play. They are the mock police station for the trainees and the academy community. Training for other Departments are also conducted at the academy. These departments include Excise, Forest, Fire force, Motor Vehicles etc.