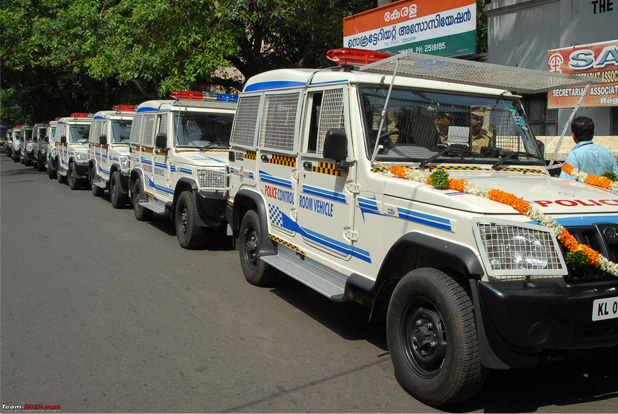 The Highway Police squad consists of personals from the general executive branch. The officials work on a shift basis from the police stations near to the highways. The Highway Police makes sure that the highways remain open and all materials which may cause traffic accidents are removed. They also prevent over-speeding, and issue speeding tickets.

A new series of Highway Police vehicles were introduced around 3 years back. It is a Forty two Chevrolet Tavera vehicle. These new vehicles have stretchers, more noticeable light bars, reflective cones, and also speed radars.

Kerala Highway Police have a phone line number which can be used from anywhere in Kerala. The phone number is 98461 00100. This number is used only to pass information for the Highway Police. This is an alert number and can be used to contact any highway patrol vehicle. If there is any distress call, then this number can communicate with the highway patrol through wireless thereby saving time. Hence, the vehicle can reach the spot instantly. The other functions of highway patrol includes enforcing traffic laws, managing accidents on roads, attending issues relating to law and order, helping the local police for criminal investigations etc. They are helpful during crime investigations because they are the ones who can reach the crime spot fast. Sometimes they also check smuggling such as transporting spirit, drugs etc. They can be considered as moving Police Stations on the Roads.  They also play an important role in helping the accident victims and making arrangements for moving the victims to the hospitals quickly.