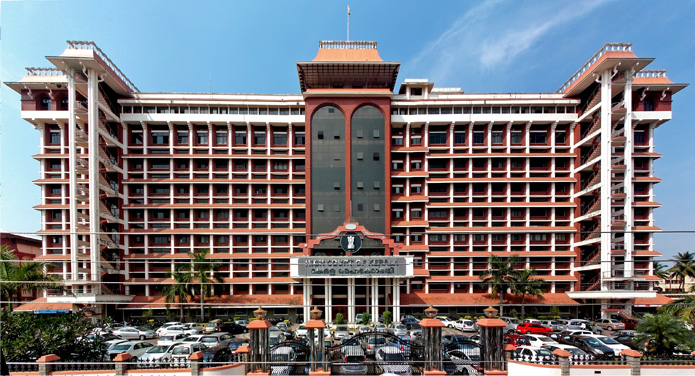 Kerala has a total area of 38,863 Sq. Kms, with a population of 2,90,98,518. Kerala was not even in the Indian map when India for freedom. Initially it was under two Princely States namely Travancore-Cochin, and Malabar. These places were under the direct administration of the British. Later the Princely States of Travancore and Cochin were combined to form the United States of Travancore Cochin on 1st July 1949. Malabar was the part of Madras Province. It was on 1st November 1956 that the Travancore Cochin and Malabar integrated to form the Kerala State.

There was no provision for administration of justice upto the time of Colonel Munro. He was a British resident and Diwan of Travancore. With the aim of reforming the Judicial System he submitted a regulation for reorganising the courts. Her Highness, Rani was more insisted about the preservation of the trial and thus in 1811 passed the Regulation. The Zilla courts came into being in 1811 and the Huzur Court was also established in 1814. During those times the Huzur Court was the final court of appeal. Later when the Sadar Court was established it replaced the Huzur Court in 1861. The Sadar Court at those times had all the powers which the High Court, has now. It was operational from 1861 to 1881. In 1887, the High Court of Travancore was started. Initially there were five Judges, out of which one was the Chief Justice. There was a Pandit to advise the judges about the Hindu Law. Mr. Ramachandra Iyer was the first Chief Justice of Travancore High Court.

In 1812 during the rule of Col. Munro graded law courts was established in Cochin for the first time. Before that it was the Desavazhis and Naduvazhis who heard and settled disputes based on some custom. If the disputes are very serious and cannot be controlled by them, they are taken to the king himself. Col.Munro established two Sub Courts each at Trichur and Tripunithura. In Ernakulam a Huzur court was started where there were three judges for attending the cases for final appeal. This system was followed until 1835. The Huzur Court was then changed as the Raja’s Court of Appeal and the Sub Courts became the Zilla Court. Unlimited jurisdiction was given to the Zilla Courts but the confirmation was given by the Raja’s court of appeal. In1900 the Raja’s Court of appeal was converted as the Chief Court of Cochin. There were three permanent Judges and S. Locke was the first Chief Judge. Finally while Sri. Shanmukham Chettiyar was the diwan, the Chief Court became the High Court.